CULT OF NYARLATHOTEP (or Thee Church of Starry Wisdom) 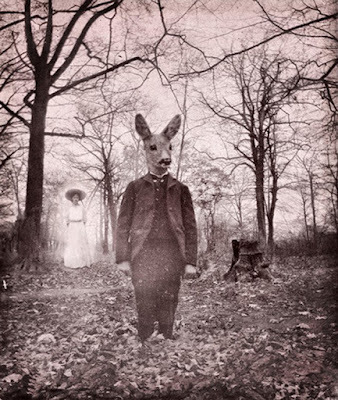 The worshippers of the Crawling Chaos, the Ebony Man, the inscrutable tormentor of mankind known as Nyarlathotep, gather at Thee Church of Starry Wisdom. It is the most well-known of the ancient cults, and semi-tolerated where it appears - in a mountain cave, or a dungeon, or a few miles from a village amongst the downs - only for the cult's healing magics. It is rumoured they can cure afflictions which are beyond even the power of the followers of the Christ Jesus, and many desperate folks will seek them out when other options fail.

The problem is they're totally intolerable. They just won't leave you alone - once you've been to their temple and been healed or helped in any way (even after you've paid them), they will never stop trying to convert you. In the most awkward ways possible, maybe by showing up in town when you're trying to have a drink and party, or rolling up behind you in the dungeon and loudly proselytizing, catching the attention of nearby monsters. They might try to kill you in the course of their normal cultish activities, but during the fight they'll be lecturing you still. At all times, they pepper their dialogues with terrible New Age speak and motivational slogans: "Be the change you want to see in the world!" "Life is an amazing adventure!" stuff like that. Use this. Everybody would hate them even if they weren't servants of the Ancient Ones.

They wear the attire of ordinary English folks in order to blend in with the populace, but due to their master's mind-bending revelations re: space and time, their clothing is always from the wrong era - they never actually blend in. In Arthur's Britain they are dressed like 19th-20th century country squires, all waistcoats and pocket watches and tweed. They wear animal masks to indicate their rank - predatory and dangerous animals are the low-HD supplicants and initiates, and every increase in status uses smaller and less dangerous animals, until the high priests are wearing mouse, rabbit and hedgehog masks.

During combat, their AC is 11 until they get surprise or win an initiative roll, and then their minds are filled with Nyarlathotep's revelation of angles and distances, making them harder to hit. Add 1 AC for every round they go first - maximum bonus is equal to the HD of the highest-ranking cultist around.
Nyarlathotep has gifted his acolytes with additional magical abilities as well - they can cast spells as a Magic-User of level equal to their hit dice, regardless of their actual class (if any). I give them spells from a special "dungeon-only" spell list the PCs don't have access to.
Posted by HDA at 5:17 PM No comments:

A few things I noticed after dusting off my King Arthur vs. Chthulhu Labyrinth Lord game notes.
a) I didn't have as much written down as I thought, and
b) a lot of the core concepts of the setting are at stark odds with each other, and
c) there is so much other cool stuff I want to CRAM in, it makes it even worse.

But there are a few things I put together when I started working on this setting and they're really cool and shareable. I'll start with some of the cultist enemies, based on one of my fave bands:

CULT OF AZATHOTH
(AKA The Blind Idiot God, The Nuclear Chaos, The Daemon Sultan)

The cultists of Azathoth are the *really* weird ones. They will appear, seemingly out of nowhere, and
make ominous statements (some true, some false, all vague and incomprehensible) in a grinding old-man whisper. Go ahead and use some psychedelic rock lyrics or a few lines from your favorite experimental novel. They may attack, or simply say their piece and leave. Their motives are inscrutable and the rites they conduct have never been observed. The lower-ranking members wear nooses and executioners' hoods. As cultists increase in rank (and Hit Dice), they wear more elaborate headgear and costumes.

As weapons, they use accursed bone flutes that produce monotonous whines, drums of stretched human skin, violins bent and twisted into near-unplayability, and the occasional large bell or gong from distant lands. Playing these instruments damages anyone within earshot with the soul-twisting melodies of chaos. Save vs. death or take 1d6 from flutes or violins, 1d8 from drums and 1d10 from large bells (the artillery piece!). The instruments have no magical property in themselves and not all of them even play regular music.

Their ability to show up unexpectedly isn't just a goofy narrative convention, or coincidence - they can travel through shadows and dark corners like a Dimension Door, fading into one and appearing out of another within 100 feet, but only if both locations are not being observed directly. They can't appear or disappear right before your eyes, but it's easy for them to sneak up on you or escape combat if they can get around a corner.


EDIT: Here we go, this is what Azathoth up in your shizzito should sound and feel like:

Steroid Goats and other pictures

Sometimes I do this weird thing where I am a big fan of something, but I forget that I like it so much. Then years later I'm looking through my CD shelf, or browsing around the internet or in my bookshelf and think:

"HOLY FUCKING CHRIST this is fantastic, my whole life has been wasted whenever I wasn't [doing/reading/listening to this], how did I forget about this?" I'm sure it's just life in the 21st century and mass distractions. It's weird, but that's how I feel today.

Because another key part of this rapidly less-Arthurian than I thought game (which I had forgotten about until the other day) will be BLACK METAL. I think this is why I picked up on Labyrinth Lord, the illustrations (especially of Orcus) look like some of the '80s and '90s B&W black metal album art. Here are some pictures to indicate what I mean. Some of these are huge, click on them for full-size:

Inside the dungeon, we shall only listen to black/death like Teitanblood, Antediluvian, Mitochondrion, Portal, Blut Aus Nord, AEvangelist, Conqueror, Blasphemy, maybe some Demilich or Ulcerate and the occasional old Rotting Christ and Mortuary Drape to lighten things up. Everybody's gonna hate it but me!

Now I try to mash that stuff together with

That wasn't too hard actually! It's not only about the shining castles. This gives me lots of brain-fodder to work with. Dropping King Arthur down a few notches, gritting it up, taking away some of the domestication that comes with the complete and total reign of a golden age in the kingdom.

The more I think about it, the more I think that the best time to set this game would be while Arthur still hasn't solidified his reign. Maybe he's just one powerful warlord among many; maybe he doesn't have as much manpower as he needs, and is out looking to fill his round table; maybe he is busy trying to repel the Angles and Saxons from Britain's shores wherever he can, and doesn't have time to run a country. Maybe he's fighting a constant battle against the snake-men, who were also pulling the strings of the Roman Empire, and want Britain back now that the legions have pulled out. Any way you slice it, this is more interesting than peacetime, and leaves the PCs more room to strut around poking their heads into caves and crypts.