Last year I found a book called Necropolis - London and Its Dead at the used bookstore. It gets me PUMPED! Although I left my Spoils of Annwn game on the back burner, Necropolis gave me some great ideas for the haunted ruins of Londinium. I still haven't finished reading the book and actually can't find it at the moment, but sometimes thinking up new undead monsters is the only thing worth doing...

"Surely you know that just as the momentous events of the past cast their shadows down the ages, so now, when the sun is drawing toward the dark, our own shadows race into the past to trouble mankind's dreams."
-The Sword of the Lictor, Gene Wolfe


Remember that bit in From Hell (the comic, not the movie) when Gull has that vision of the skyscraper? The carnage, death and infernal magic that brought Londinium low twist not just the city's environment but the very force of time itself. For now, it's just an excuse to do things like this:

Bleeding, weeping, covered in sores, their skin turning black, these zombies still think they're alive (they seem so from a distance) and will do anything to avoid "dying" of the disease that still infests them. Dressed in peasant rags from the plague years (perceptive PCs might notice the differences in fashion and realize something's up), clutching rosaries or garlanded with herbs they stumble, crawl and scream for mercy - from you or God, who knows? They aren't actually intelligent, the things they say are like tics with no real meaning. All the while they're trying to hold your hand, get you to pray for them and lick your face.

Stats as zombies but if they touch you, could get the black plague. Save vs. death or you're fucked: lose 1d4 CON/day. Every day you get a new save, and the disease has run its course if you can make 2 saves in a row (if you're a merciful DM). Cure Disease and similar magic will help as normal, but only high-level spells like Restoration will restore lost CON points. 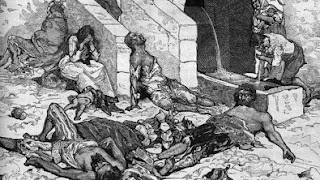 To this day there are places under London they can't dig for fear of what will be unearthed. In 1665, the expense of individual burial plots for each dead Londoner was too high. The poor of the city were dumped by the authorities into huge mass graves. Since the city's Bishop wasn't willing to consecrate ground that couldn't be held in perpetuity by the church, these short-term plague pits were left unhallowed. And now the poor dead are restless.

A great mass of human bones, animal skeletons and dirt all mixed together. The horde might be stuck in a wall as if just breached by digging machinery - this makes the immediate area highly dangerous, but much worse is a horde freeing itself to move around, crawling & dragging slowly through the cramped dungeon corridors, hungry to add infected victims to itself.

Their touch is infectious exactly as the Plague-Dead above.
Miasma - The entire area around a plague pit horde is infected. Anyone within 30' must save vs. paralyzation every 2nd round (every single round when breathing hard - running, combat, etc) or begin to choke & cough on the noisome air: -2 to attack rolls AC and saves, stealth is impossible. 1d6 rounds after leaving the miasma it wears off, but make a final save with a +2 modifier. If you fail, contract the black plague as above.

These creatures make the tunnels and crypts beneath Londinium extremely hazardous. Many adventurers have returned to civilization laden with Roman coins and grave goods only to perish a few days later, coughing colours. A few enterprising grifters have begun selling miracle-cures for the malady (which they call Orcus' Revenge) outside Verulamium - needless to say their effectiveness is limited.

These Brits need no introduction around here: