The kickoff to my (currently online) Labyrinth Lord game based around the City-State of the World Emperor was last Halloween, when I ran an ostensible one-shot for my regulars and some of their friends who had never gamed before.

I wrote this report up for all of them to read, and may as well share it with you folks here. Now that we're making progress in this campaign, you can expect other fun material forthwith.

I also included what I thought would be a fun campaign kickoff, combined with NSFW - the adventure idea at the back of Kelvin Green's Forgive Us, called "Death And Taxes." Mixing these adventures together went pretty well, and of course I had to add in some of my own ideas as well. Later play reports will show that the PCs, in classic fashion, have not pursued ANY of the leads discovered in this session.

NO SALVATION FOR WITCHES

Funeral For a Friend

The characters met at the funeral of James Blake, an old army buddy who died under mysterious circumstances. They assembled to pay their respects on the way to Drydale Priory where longstanding rumours suggested heretical activities and/or valuable treasure.

A neighbouring farmer was the only other attendee. He was confused that Bishop Gray hadn't sent at least a junior priest to officiate and worried about Blake's missing 11-year old daughter Deotina. He also mentioned a group of tax collectors had been asking questions, and asked the group to find out anything they could. A search of Blake's home turned up little except his old Legion gear and a scrap of paper torn from his diary about the taxmen. There were signs someone had packed and left in a hurry.
At the caravanserai, the party found human bodies everywhere killed and mutilated in the most horrible ways. The only two people left alive were a terrified, useless traveler named Arrerand and the concussed woman Naniela, who was beyond his power to help. She mumbled and raved about "red lights in the sky... the dancing woman with skin of diamonds" and clutched her bleeding head wound. Eric healed her injury and she became more lucid. The two helpless travelers were interrogated about the tax collectors and recent events but didn't know much. The party sent them on their way.
The priory itself was unreachable, covered by an impassable dome of lambent red light. Leaving it for the moment, the group proceeded to Drydale for clues and found the citizens in the middle of a witch trial! Leading the event was a thin, intense man named Kynnakon. Four women had already been killed and a fifth cried upon the scaffold, pleading for mercy. At the back of the village, a strange glow similar to the red dome could be seen.

Thinking quickly, Eric stepped in and engaged the man in a discussion about witches and their verification. As a man of the cloth his words carried weight on these matters and he convinced the crowd to disperse. Without his mob, Kynnakon was less confident. He released the "witch" Mertysa to the party's care and told them a strange story: six women had passed through towards the priory a few days ago armed and armoured, dressed in strange clothes. Since then all their livestock had died and they blamed witchcraft.

Lothos circled around the village to investigate the red glow. A small red sphere floated at head height, softly glowing. While the townsfolk were distracted he took it in his cloak and rejoined the group, who departed before the crowd's temper could change again. Returning to the priory, the small red sphere crumbled into dust, sympathetically bringing down the giant glowing dome and allowing entry. Unluckily for the elf, the sphere destroyed a few of his possessions as it vanished from the world - including his spellbook! 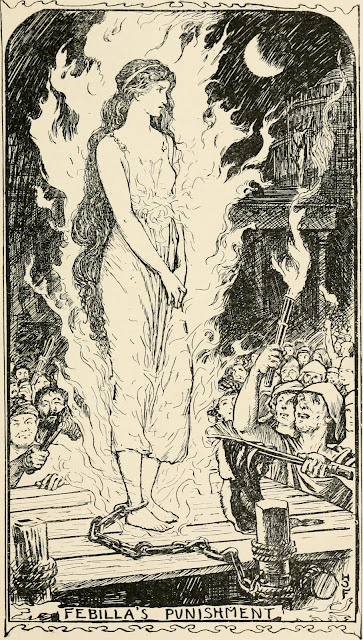 The party entered the grounds, avoiding the church for now. Searching the outbuildings revealed a succession of horrors - women giving birth to mutated children, a man and woman fused together while still alive and a puddle of fast-moving scarlet bile.

Outside the baths, they were greeted by an imposing figure - Sir Karavon, a knight in gleaming white plate mail. He demanded to know their business and claimed to serve the cause of Mistress Orelia. After all his tough talk, battle was inevitable. Lothos sustained a terrible blow from Karavon's greatsword but the group felled him together and stripped the body.

The group had had enough of these horrors. They barricaded the infirmary full of aberrant children and set the roof on fire. While they were debating their next move, Kynnakon arrived on the scene leading a small torch-and-pitchfork mob. The group took up ambush positions, Tullius Jr slipped inside incognito as Sir Karavon while Eric addressed the mob, whipping them into a witch-hunting frenzy.

Inside the church was a whirl of activity: dozens of peasant women dancing in a mad frenzy guarded by five heavily armed foreign women, overseen by two robed & hooded men and an ice-pale Avalonian sorceress in a red sash. Orelia called out to "Sir Karavon," asking the knight for a report. Tullius Jr indicated the angry mob outside and mobilized the warrior-women to battle, remaining indoors at Orelia's side in case of emergency.

Battle was joined in front of the church! The Five Bishops (as they called themselves) guarded the door in a wedge formation, bravely meeting the mob's charge. What they weren't prepared for was the party's vicious ambush: Humphrey ran up behind one for a backstab while Aladar and Lothos peppered them from a safe distance. The Bishops couldn't withstand this assault for long and began a fighting retreat into the church. This turned out to be a mistake, as the mob charged in and held the door open! Things began to happen very quickly. Tullius Jr showed his true colours when he struck Orelia by surprise with his greatsword, nearly killing her in one strike. Retaliation with her magic wand did not have its intended effect. Two-Faced Humphrey ran around to the back and climbed up to a window for a surprise attack. Eric began smashing windows which allowed Lothos, Aladar and Avala to take up firing positions.

In a deft use of magic, Aladar used his Unseen Servant to snatch Orelia's magic wand right from her hand before she could use it again. Tullius' greatsword finished her off after that. With magical support from Avala's earth elementine, a diving attack by Humphrey and a magical grasping fist from Aladar, the two robed figures were destroyed and revealed to be only the flayed skins of men animated by Orelia's witchcraft.

With all opponents defeated, the mob began dragging the dancers off the platform and the party felt the beginnings of a tremor run through the building. Thinking quickly they fled the scene just in time for the church to come crashing down in a blaze of light and magic, killing or wounding all inside! The rubble began to burn, but Eric and Humphrey dragged over a tub of water from the baths, buying everyone time to sift the wreckage, rescue a few townsfolk and recover some valuables and the mysterious book they originally sought.

The smoky priory grounds were visited by a new group - the much-talked-about tax collectors! Their leader was a turbaned Viridian named Irmugar, sent by the Padishah to investigate rumours that Blake had stolen or unreported wealth. They seemed not to know he was dead. The party convinced the taxmen to take the peasant survivors back to Drydale - Irmugar indicated Tullius Jr and agreed the situation was well in hand with a "Knight of the Cockatrice" present. But something else he said got the group thinking...

The adventure ended where it began with the party exhuming James Blake by torchlight. Inside his coffin with his body was a locked oak box. Prying it open revealed a battered knife in an old scabbard, a locket containing a single golden hair, Blake's diary and a strange leatherbound book called The Great Devourer.
Eric meanwhile was perusing the blackened tome he had found in the rubble and touched its faded pages with his bloodstained hands. They blossomed into fresh crimson runes and symbols, while words formed in Imperial: "Greetings. Whom do I have the pleasure of addressing?"

Silver drinking horn, carved with runes and studded with garnets, slightly scuffed (640 sp)
A silver-gilt radiated brooch ringed with amethysts (1200 sp)
Solid-gold decorative phallus (800 sp)
Treasure value: 2640 sp
Each character gets 440 sp and 490 xp
*****
Don't worry - more Land's End material is in progress. Honestly the biggest obstacle to my blogging is that I'm gaming more often than I'm used to! It's a great problem to have, but one I was unfamiliar with before now.
Posted by HDA at 6:14 PM