Sorry I've been away. Work for my whole gaming crew picks up in the summer months, so we haven't been playing much and I've spent my free time on other things instead of gaming prep.

But commentary and controversy have bestirred themselves of late, and I tried to answer the call! I first heard rumblings on MeWe (I find it about as annoying as Facebook, so I'm not on it very often). Then this thread "The State of Post-OSR Content" on the tenfootpole.org forums [1]. Melan posted "Third Year's the Charm: The End of the OSR", and Anthony Huso wrote his own response. EOTB wrote a response too. Finally, noisms dished up "A Lot of RPG Books are Too Expensive." and the follow-up based on extensive commenting "The Price of the Hobby."


We can also backtrack to Huso's modern classic "I Will Not Relent," which is HIGHLY fucking relevant 100% of the time.

In response, I wrote, deleted, re-wrote and re-deleted a long and annoying manifesto/screed on the subject of: how to stay underground in a scene crammed with folks trying to make money on their RPG writing. I just couldn't get it to come out right! I feel passionately on this subject, but I started to seem like a dick even in my own eyes. It felt like lousy teenage angst and so many more eloquent folks have captured things far better than I could.

Instead of that garbage, here is a double-feature review of two little pdf supplements I found on Drivethru. As Samiam once sang, "life can be so dull." So I try to focus on the things that actually matter, like what to prep for my next game! 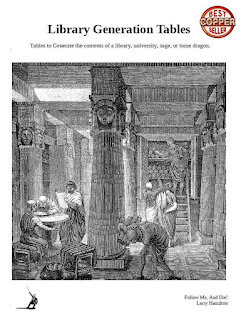 by Larry Hamilton
Published by Follow Me, and Die! Entertainment
https://followmeanddie.com/

A ten- and a thirteen-page PDF including cover art and intros. These are a useful resource if you can get past the meandering writing, grammar errors and lousy formatting.

They remind me, in approach, of the classic Hack & Slash treasure document (PDF link - I still use this one religiously). Table after table attempts to exhaustively catalogue the subject matter. These two PDFs don't quite reach the transcendent heights of -C's classic though.

The LGT starts off strong, with tables for a book's shape, size, material, subject matter and age. Tables for the filing system a library uses. Tables for the experts' interpretation of a book. Anything and everything you could need to stock a library!

On the downside, it's plagued by formatting problems and really disorganized. There are sections or headings - it's just table after table after table mixed together, unrelated entries side-by-side. Sometimes a new magic item is thrown into the middle! If I want a specific table, like "lost in the library," there is no way to know that it's on page 3 between the table for "number of buildings in the library" and the description of "The Book of Worthless Facts and Useless Information." Of course the short length of the document itself means it can't ever take that long to find anything, but... didn't we learn from the 1e DMG? 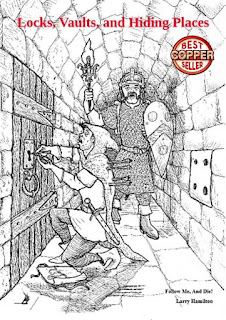 Sometimes instead of a table, there is a list or a few suggestions on a given topic, like "Specialized Libraries: Medicine, Law, Religion, Magic." I feel as though these could have been cut, moved to their own section or expanded into full tables. They seem like afterthoughts, and probably should have been cut completely or expanded.

As for LVHP, it begins on the right foot with Hamilton recounting stories of assisting his father - a locksmith - in his work and offers food for thought on the field. It's nice to see someone drawing on their life experiences for a gaming supplement. I had high hopes for this one, because I find integrating traps, secret doors and such into my dungeons pretty tough.

Unfortunately, just like the LGT this one is riddled with errors, awkward wording and other symptoms of an overall "rush to press." The tables for locks and keys are pretty good, but the Hiding Places section is sorely lacking (do we really need a "what is hidden?" table with entries like "Good guys hide something from bad guys.")

Actually, I think the best parts of this supplement are not the tables. When Hamilton is laying out his thoughts about locks, or describing a thief's thought process in the Entrances & Exits section, I felt I was learning something useful and interesting. Still, these blurbs lose focus towards the end, and are in serious need of a cleanup. Also, despite the cover art there wasn't anything about traps in there at all!
Overall, these PDFs are rough around the edges but can be useful if you look past the formatting and other issues. For a buck the LGT is worth a look, but LV&HP is on the level of "long, rambling blog post" right now. If Hamilton did a real editing pass, trimmed the fat and expanded a few sections, added headings, etc, these could really be great resources. But they aren't there yet.

PS: I think anyone who aspires to a kind of 'cataloguing' supplement like these or -C's treasure document, should probably read House of Leaves to start with.

Now I'm out, I bought a used copy of WG4 at my local game store and I'm eager to crack into it! In case you need more instruction, ya boy dishes it up. Try to see the parallels between the music and RPG bizzes:


[1] The discourse gets pretty heated in that thread, but don't judge everyone too harshly. Most of the time we all get along quite well.