I dug through the mailbag, the comments and some of my books - wouldn't you know it, I found enough tables to warrant another round. 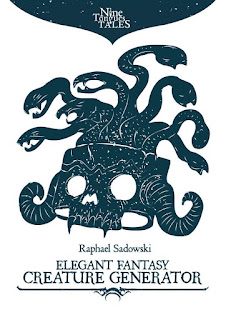 
I dig this one. Mr. Sadowski packs a big punch in a simple little 16-page PDF. Like the tome of adventure design from last time, the EFCG concentrates on 'top-down' generation. Rather than rolling stats, it generates creature's shape, size and attributes and leaves it to the DM to assemble & stat up in the end. Although it means more work for the long-suffering DM, the possibilities are limitless. The first few tables remind me of Raggi's RECG a little bit (is that really a crime?) and it distinguishes itself elsewhere so I'm fine with that.

It includes a few entries rarely seen in creature generators, like "static" for creatures that don't move, or the classic "swarm." The Mental Faculties table was a nice touch too. The Random Features section is a really good mix. Special abilities, visual quirks and odd behaviours all mixed together, so you really don't know what direction it'll take you. If he had only covered the basics this would still be pretty decent, but the Finishing Touches section puts the icing on. Peculiar Circumstances, the Weirdifier and Horrifier tables add strange behaviours, compulsions or abilities that you almost never see in these things, like "oneiric - you will have ominous dreams about its presence long before you even meet it." Fuck yeah. Let's give it a try.

Holy christ I damn near rolled up the horta! This rules. How to make sense of all this strangeness? A carcosa-coloured creature of otherworldly anatomy that can't move, but levitates. It has a tragic past which it sings about. Some part of its body is valuable, which could account for the tragedy - maybe the rest of its race has been hunted down for parts? Materializing is good - through a particular ceremony you can summon this creature from the ether if you seek to kill it for valuable parts (rare spell component anyone?). Then you must deal with the entity's tragic song which reduces you to tears, rendering you unable to act (mass Hold Person) while it eats you. If you cast Comprehend Languages and learn that it laments for the death if its race, maybe you get an attack of conscience about killing it? Fuck yeah. Put some clues in a ruined temple in the wilderness, I've got myself a great swords and sorcery hex location!

Number of Rolls? There are 9 tables, but Sadowski encourages the reader to continue rolling until the idea comes together. I didn't use every table and made 12 rolls to generate that creature up there.
Would I use this in the middle of a session? No way. Sadowski explicitly says not to in the introduction.
Variety and Reusability? Looks like it has enough possible combinations to get over the 'almost infinite' hump. I'll be using this one again for sure. 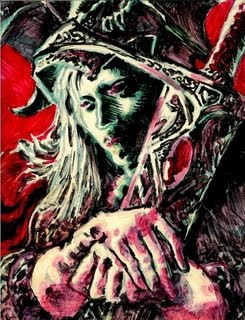 The Monster Machine
by Vincent Baker
from Fight On! magazine #2
print or PDF here


Holy shit, Vincent Baker wrote a piece for Fight On!? Well, this one is weird as hell and doesn't resemble any other generator I've reviewed so far. After four rounds of this stuff, that's a damn good thing.

Start by rolling twice on the Materials table. Then pick or roll for abilities based on what materials make up your monster. Pick a weakness associated with one of the materials. Then write up a description and tie it all together. That's it! Just as much space is taken up by a sample bestiary of 9 monsters generated with these tables. All of those are pretty cool, and I would be happy just swiping a few of them for my own game either way.

This table won't generate many "naturalistic" monsters. More like magical beasts, aberrations and sorcerous experiments. If that's what you need, give it a look! On the downside, like most of the early FO! material this thing is written for OD&D I think, and some of the terminology is unfamiliar. What's defense class or "DC"? Is that like Armour Class? What does "level" mean in this case? Is it like hit dice? What's a HTK? I'll just go with it and see what I get:

Ancient skeletal guardians assembled from multiple creatures. Look like 10' tall humans with spikes and blades of bone protruding everywhere. Now so old that mineral deposits have built up and begun turning them into stone. What antique culture made them? Usually assigned to guard a single place (doorway, treasure vault, etc). Because of slow movement, they'll only pursues fleeing opponents if they are recognized as interlopers a second time.

Number of Rolls? 8-10
Would I use this in the middle of a session? Nope. Even though there are only a few tables, it takes a bit of thinking to get a useable monster.
Variety and Reusability? Fair ta middlin'. There are only so many abilities, but the vagueness of the Materials table throws a lot of this work back on the DM. The attacks and weaknesses are broad enough that they could fit any application, but I worry that with such a broad-strokes approach, you won't be able to roll a result on this table strong enough to force your thought outside its normal track. Which is the whole point of a random monster table. 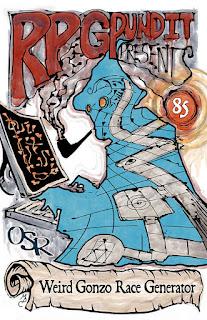 43 pages? This better be good! It starts out oddly, asking me to roll on a Favoured Ability table for which stat gets a +1 bonus, then for hit dice. Not putting your most Gonzo foot forward...

After those tables and some explanations regarding notation used in the document, we make it to the meat of things. The Basic Species table determines what category of creature we have. From there, we scroll down to a subtable that offers a selection of abilities or traits unique to it. Each of these is a page or two. That's why this thing is so long! For any given creature, you'll only use a small section of the whole document. The Basic Species entries are decent, with some standards (lizardman, underwater, anthropomorphic mammal) and some really odd entries (asshole species, wuss species).

Progressing to the individual tables, I was irritated by the piddly entries. Why am I rolling on tables with results like "add +2 to an ability" or "+1 to willpower saves"? After reading through a bit more, I started to understand why these minor bonuses are included. Rather than wild-ass monsters, this PDF is for creating new (mostly humanoid) races with stats on a human level, like dwarves and elves. Just as dwarves have that bonus to detect unusual stonework and elves have resistance to paralyzation, this blob-creature I rolled has "half damage from fire, double damage from cold."

In the introduction Pundit writes that these races aren't intended for player-characters, unlike "Mutant Hordes of the Last Sun," which I am considering checking out next. This pdf is not without its flaws, but for 5 bucks I'd say it's well worth it for the intended application.

Fuck man, I wish I had a bit more to work with... These tables gave me no clue as to the look of this race, though. I'm going to roll again on the Basic Species table for another entry to combine with:

So a race of small, artificial magic vegetarian blob-men. Now we're talking! They can't manipulate objects, so weapons and armour are out, but they defend themselves with a secreted poison and their minor magics. Created by a radical sect of druids to protect wildlife from encroaching civilization. I'd run that shit in my game.

Number of Rolls? Minimum of about 8. In rare cases (lots of "roll 2x and combine"), could be as many as 17.
Would I use this in the middle of a session? Maybe. Depending on your rolls, generation could be dead simple or involve a bit of flipping back and forth. The party entered a new dungeon and you're really tired of orcs? Need a quick humanoid opponent for this random encounter? This thing gotchu.
Variety and Reusability? Reusability could go a long way, but the variety is limited. This document aims for a specific type of creature. It's not a one-stop shop for monster generation, but might have exactly what you need - I think I will refer to it more for strange alien races in Land's End.

Fuck man, a lot of really strong contenders today. Baker's Monster Machine is classic old-school wild imagination, especially for being a tight three pages! Pundit's entry is good once I got a handle on it, but long and of very specific usefulness. I think my personal favourite is the Elegant Fantasy Creature Generator, as it balances length, breadth and depth well and creates a LOT of material for my brain to grasp onto.

I'll use all three of these in my home game.

Now for something fast & nasty (just like a good monster table):