Oh yeah, you forgot about this series? I didn't!

In case you missed them last time, check out:
Part One - started it all
Part Two - LotFP 'house round' demon-summoning edition 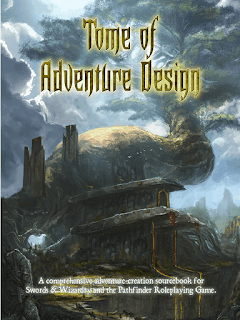 The Tome of Adventure Design

The heavy-hitter of the random table game! For those who don't know, this book has a table for everything. I have barely scratched the surface of this thing's capabilities in my own games. It is divided into four sections: Principles and Starting Points, Dungeon Design, Non-Dungeon Adventure Design, and of course what we're all here for: Monsters.

The production values for this book are decent. I have the older version (not pictured here), and it has the kind of black & white artwork we have come to expect from FGG / Necromancer. Some of the pieces are reused from books like Rappan Athuk I think, which I always thought was weird, but anyway the illustrations are just a bonus in this one. The formatting is weird as fuck though, with tables crossing pages in an awkward way. It could have done with some more editing - frequently a table with ten entries will read: "0-10 - result, 11-20 - result..." when a simple d10 would have served perfectly. The perils of copy & paste? You be the judge.

Rather than providing quick stats or a jigsaw-puzzle anatomy system like other random generators, the ToAD is geared towards generating new ideas in the prep stages. While there are still physical attributes and special attacks to be rolled, many of the tables take forms like "Planar Trading/Commodities," or "Preparations for Intelligent Undeath" meant to prod your mind in a new direction. Most monsters rolled up here could form the seed of a new adventure instead of random encounter fodder. As you'll see, these tables inevitably lead to new and interesting combinations.

There are an absurd number of tables in this book (86 in the monster section alone!) but you'll never need to roll on all of them for one creature. The first table "Monster Categories" sends you to the appropriate section for a given creature type where a more manageable selection of tables can be found. Or if you like, you can go to the second half of the monster section with a raft of all-purpose tables, allowing you to build a new creature from the ground up in a more general way. Let's see what happens:

Type - Draconic
Dragon's Unusual Physical Feature - Body: Dragon is bioluminescent or has a luminescent "lure" to attract prey like an anglerfish
Dragon's Unusual Ability - Theme: Elemental or Planar
Dragon's Mentality, Motivation and Status - Hide. The dragon is virtually obsessed with keeping itself hidden from human notice.

This is a strange one. A huge glowing winged creature that's obsessed with hiding has a real problem, but would make for an interesting stalking mission, some kind of Alien: Underdark. Every time you see the dragon's glow around the corner it runs away! Its unusual ability might be tunnelling through rocks (elemental earth)  or even Gate-ing itself around to get away. Maybe scaring the dragon into digging a new tunnel is the only way to reach a certain place? The possibilities are endless.

The second option is that only a luminescent lure is seen, while the dragon camouflages itself within the cave walls. Instead of being perpetually in conflict with itself, now its abilities and personality mesh. You never actually see the dragon until it's too late, when it eats you. A quick-thinking character who isn't distracted by the lure might shine a light on the dragon to escape certain death at the last second.

Both of these make me think of Veins of the Earth, which is a damn good start. I can't decide which idea I like better, but I would put either one in my game.

This monster looks like a tough customer. We don't know anything about it's actual body shape except that it has a piercing tail and chitin. An insect with a stinger? Scorpion? Maybe a horseshoe crab!

Those special abilities are very interesting. We can ditch the 'exhaled' part of attack #2 and have two straight up sound-based attacks. The second one is awfully bland compared to the first, and I would roll them into a single attack - a sound so awful that it causes spontaneous bleeding is sure to make concentration difficult!

The regeneration and fire immunity make the "healing cult" result quite interesting. Although it can regenerate wounds and may even be immortal, those around it suffer terrible bleeding from its voice alone. A messed-up cult indeed if they're willing to endure that punishment to be around their beloved regenerating giant crab.

This would be a really bizarre sword & sorcery god-monster, the kind of thing Conan squares off against in a lost city on a plateau. Attended by its deranged haemophiliac cultists who attempt to sacrifice him by exsanguination! What more could you possibly want?


How Many Rolls? Varies widely. The Beasts section might be eight. The Undead section only has 5 tables, and you won't need them all at once. The Mist creature section only has one. Generating a creature from scratch starting with table 2-72 could be up to fifteen.
Would I use this in the middle of a session? Are you high?
Variety and Reusability? Borderline infinite. If you ever run this book out, send me some of your players, okay? I can never find enough. 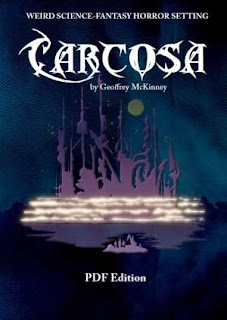 by Geoffrey McKinney
from Lamentations of the Flame Princess
lotfp.com
print sold out? buy the pdf here

This one was recommended in the comments section of part two. I had forgotten about the Lovecraftian sword-and-planet madness in this book! As the most common monsters on Carcosa, the Spawn of Shub-Niggurath have to come together quickly at the table with enough variety to keep things fresh.

The first half of the tables are standard stats - movement rates and types, armor class, no. appearing, etc. The second half are descriptive - a table for colour (because it wouldn't be Carcosa without colours), eyes, mouths, hide, and 'body type' - which is a list of taxonomic animal shapes (batrachian, hexapod, annelidoid, etc) that required me to do a little googling from time to time. Finally it's rounded off with a table each for special attacks & defenses.

So a great yellow bug with a suckered hide and a circular gaping mouth. Sounds Carcosa as hell!

Next up, the robot generator is even more fun than the Spawn tables. After a few basic stats, the book includes tables for cool robotic shit like treads, grenade launchers and x-ray vision! Let's see how it works:

Well, this thing can certainly get around. It moves slowly on the surface by jumping, but it doesn't really matter - with its microwave cannon, everything within 3 hexes is a no-walk zone!


How Many Rolls? Spawn: 12-20 Robots: 13-23++
Would I use these in the middle of a session? The Spawn tables, yes. They are compact and straightforward, across a handful of pages. Sometimes the results or ranges are strange (20-50 hit points, a 1-16 table), and it would be better if these were streamlined - trying to puzzle out how to roll these in the middle of a session is not high on my agenda. The robot table can refer you to the space alien armament table to determine its weaponry - so now I have to flip *backwards* and roll 4 or 5 more times! Almost no explanations are given for the robotic attacks, defenses or special detection systems - you'll have to roll them up in advance and think about how the abilities will work, write up your own stats.
Variety and Reusability? Somewhat limited. All you can really get for the Spawn are monsters of 'a shape and colour', so it works for an ugly beast that crops up on your random encounter table, but one seems generally the same as another. The robots are all bizarre and highly dangerous, but these tables feel unfinished. A little more development would have gone a long way for me. Given the amount of rolling necessary I would have liked to see a more fleshed-out final result. 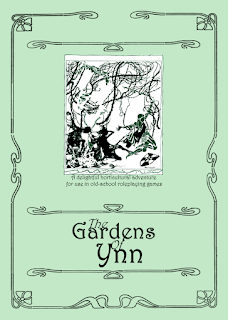 I wrote an excitable review of this book a while back. Paging through it again has been great fun - this is really one of the more creative things to come out of the scene in the last few years. This thing could have made it through the gate with half the content but Emmy "went the extra 6-mile hex" and turned out something bursting at the seams with ideas.

This table is very simple. Every hybrid-beast has the same basic stats, and then we roll on three tables for its physical description and some modifiers: base animal, head, and unusual features. Let's try it out:

Wow! I can almost picture a sloth with striped fur and a hyena head. Adding the gecko feet pushes it into another realm of oddness! Clearly these guys are a type of slow ambush predator or scavenger. Camouflaged on the ceiling or amongst the branches, they wait to pick off the weak and wounded members of the party.


How Many Rolls? Exactly four.
Would I use this in the middle of a session? Yes, as it's meant to be.
Variety and Reusability? Not too bad for what it intends to do. It will always be an animal hybrid of some kind of course. In the Gardens they are encountered singly, and each one is completely unique. If you were to roll up groups of these hybrids, each one different, they would probably blend into an unrecognizable mess. However if I were using this outside the Gardens, I would roll up an entirely new race or faction of humanoid creatures. Thus only a handful of rolls could give you a whole campaign full of strange new enemies!

All these generators are so different. The hybrid-beasts are ready to hit your table at a moment's notice, while no amount of rolling on the Tome of Adventure Design will give you a usable result without some further thought (and writing your own stats). I have used the Spawn of Shub-Niggurath before in my home games, but the monsters generated are interchangeable beasts, differing more or less cosmetically from each other.

In the final analysis, I have to give this round to Matt Finch and the ToAD. This is the book that launched a thousand encounters, to mangle an oft-quoted phrase. The two monsters I generated up there are already getting me excited. I'm racking my brain for a place to add them into my campaign world, and that's the best result any table can give.


PS: If anyone knows of other random monster generators I should look at, please let me know in the comments. I really enjoy these roundups. They are some of my favourite posts to write and I hope other folks get some use out of them. There is no reason to use manticores, orcs or owlbears unless you really want to.

Go out there and blow your players' minds!