So I was collecting some experience rules from around the internet, and came across this classic on Jeff's Gameblog!

Since Land's End is all about striking out alone (with your friends) into the wilderness, I've decided to adopt and expand upon this awesome eXPloration idea. My version gives out more experience but the benefits should slow down as the PCs gain levels. (It makes more difference to the whippersnappers when they spot cool new things.)

This is 'normal' experience, divided among the PCs just like treasure or monsters. In addition, I picked out a few major locations that are more significant. Reaching one of these gives EACH PC the stated xp bonus. I am considering awarding these once per player as well: your character discovers it for the first time when you do.

For most of these, you can assume the caveat "... and live to tell about it."

SOME experience awarded for goods and treasure looted and sold off. Selling your old weapon after you buy a new one shouldn't net any experience. Beheading some orcs and selling off their chainmail should, I think. In general once you make use of it, you aren't getting any cash = xp out of it.

NO experience awarded for magic items. They are rare enough and should be their own reward. There isn't anybody around who will buy them from you anyway.

True bastard that I am, I am awarding loot & starting wealth based on a silver standard, but all items have the listed cost IN GOLD PIECES in the Pathfinder Core Rules - ie. PCs have 1/10th the buying power they should according to RAW. This way they can scoop up huge sacks of money but they're still broke and hungry for the first several levels.

Experience is awarded as normal for monsters, based on their Challenge Rating. You might think between exploration, treasure and monsters there is way too much experience flying around to have a reasonable game. Two techniques exist for dealing with this:

Firstly, Pathfinder gives three XP charts: fast, medium, and slow. Obviously I'll be using the slow advancement chart, so PCs need 3000 xp to reach 2nd level and a total of 35,000 to reach 6th, as opposed to the 'medium' 2,000 and 23,000 respectively. So this should make up for the multifarious ways a character can grow.

The other option I'm considering is some kind of attenuated XP reward for low-CR monsters. Gary describes this in the 1e DMG, although the wording is a bit obtuse.  I think for our purposes, he is suggesting I modify experience awards by a ratio of enemy Hit Dice (CR for Pathfinder purposes) to average party level. (eg: an equal number of orcs vs 1st-level PCs is a 1:1 ratio. The same group of orcs vs second-level PCs is a 1:2 ratio, and defeating them should net half the normal experience.)

This seems a bit harsh and there are other factors to consider - CR is calibrated for a 4-person party and I only have three players. CR is also calibrated for wealth and magic items by level: that's completely out of whack given my vicious economic system outlined above and a low-magic setting. I won't institute this change unless it looks like the PCs are rocketing up through levels with the current system.

(I have more posts this year by September than any other year by far. How many can I do before the end of the year? Think I can make it to 100?)

Now play this when the PCs dig their greasy mitts into that next treasure-sack!!!

Firstly, let's all admire the new banner at the top of the page, which I... assembled... all by myself on my computer! The actual artwork is by the inimitable Todd Lockwood.

It's still raining in the hilly jungles beyond the Barrier.

Last session, the PCs had just agreed to go fight the 'pinks' to the south on behalf of the goblins, who wanted their territory back. Not really trusting any of the sawn-off bastards, the party slept outside the goblin fort and headed south in the morning towards the goblins' old inn. Sgt. Horgh did give them a short-term mercenary contract to sign, which (as it turned out) wasn't much help when they got jumped in the jungle later that day!


Out of the shrubbery came a yellow goblin chugging grain alcohol from a flask, and a sinister black goblin wearing the lumpy ill-fitting skin of its last human victim. Leliana scrambled for the contract to show the goblins they were on the same side, but she took too long! These gobs weren't as lucky as before, and missed Nahash completely. The lizardman skewered the gross and troublesome black goblin with his war-spear and when Leliana hexed the yellow goblin to sleep, the fight was over. 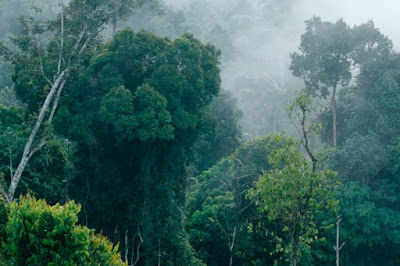 These sessions consisted of my players being pretty methodical and not taking too many chances. When they reached the goblins' lost inn, they waged a gradual guerrilla war against the 'pinks': neanderthals in wolf pelts who kept failing their perception rolls at inopportune moments. The heavy rain hampered visibility and made stealth easy.

They snuck into the inn and started stealthily killing neanderthals, but one ran away when he saw Vuk Thuul's summoned steam-beetle and so the heroes started throwing furniture up against the doors and windows to brace for the inevitable counterattack.

While waiting for more to show up, Nahash and Leliana explored the basement and discovered several inverted mounds of earth on the ceiling. Each had a set of glowing, fluorescent green and blue tendrils reaching out, waving through the air like seaweed. A glance at the two dead neanderthals on the floor confirmed it: poison! Reaching either of basement doors would bring the adventurers too close to these tendrils for comfort.


They tried to destroy one with a molotov cocktail and only succeeded in waking it up. Crawling out of the mound and up the stairs after them, a fluorescent six-armed reptile-creature with a frond of rippling tendrils for a head, squeaking out strange questions: "Is this real? Is it a dream? Where am I?" Almost panicking, they lured it out into the common room where Nahash squashed it with his sledgehammer.

Phew! I was afraid somebody would get stung into the Blue Sleep and very probably die. After that they changed tactics. Cutting up the dead neanderthals, they threw chunks of meat under the other mounds, which distracted the sleeping Anemone Men long enough to slip past.

As it turned out, they were guarding the goblins' treasure hoard! Chests of silver and gold, a strange sword of bone, a pack of carved ivory plates, a whole room of bizarre objects and curios.

A few of these items were carried by some old Land's End PCs, and I think one of my players at least recognized this. Why they are still here in possession of the local goblins is a mystery, but the players may never find out because they decided to grab up every single thing. Their plan is to bury it all, go back to the goblin fort and get paid, then dig it up and bring the hoard back to town. What will the goblins do when they get back to their inn and find it stripped of valuables? I don't know, but I'm excited to find out. I was worried there would be too much cooperation in this game!

These two sessions actually took a while. My guys really took their time here, playing very carefully, expecting a brutal siege by the neanderthals. Right now, they think they're getting away with murder. They haven't even seen what's down the well!

Anyway, next time your PCs are in a small basement with a brand-new terrifying monster with a poisonous sting...

Surprise me for once?

Reading Paizo's Book of the Damned and mining it for ideas has been many things: interesting and fun, mildly disappointing that they didn't do OGL-versions of all the classic demon lords, and sometimes... a long and hard slog.

Why is there a demon lord of every goddamned thing? Do we really need special entries for:

divs? (what the deuce IS a div anyway?)
scorpions?

This is a just really fucking bloated. I can't exactly put my finger on why this bothers me so much - perhaps an example will serve.

Playing Skyrim: Dawnguard a while back, Serana (the vampire NPC) tells you about how she became undead. Apparently a terrible ritual in the name of the daedra lord Molag Bal transformed her whole family into vampires thousands of years ago. This was cool, because nobody ever told me "Molag Bal's domain of influence includes: vampires." He is described as the lord of enslavement and brutality which makes sense, but isn't blindingly obvious. It was surprising and told me something new about the world.

Conversely, imagine finding a castle of vampires in Pathfinder. What terrible demon master do they revere?? Well duh, it's Zura. You knew that already. The vampires have a vampiric master who wants to do vampire-type stuff.

Why even bother? We've learned nothing new about them. It would be exactly the same if Zura didn't even exist.

I want to see intelligent monsters signing up with Arioch or Moander or Demogorgon or even good old Orcus, whatever! Not their "designated infernal union rep." Spare me.
Posted by HDA at 6:51 PM No comments: