Well, I'm working night shift pulling cable through government offices for a few months. So it's back to Nocturnal Supremacy, Livin' After Midnight, Dead By Dawn type shit in the realm of Terrible Sorcery. For my 100th post, let's take the piss out of some other people's opinions. Everyone is talking about character death again, I guess. Is this a sign of decadence in a movement: folks arguing about things they claim to/should already know the answer to? 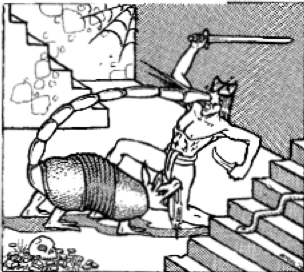 Hey man. Play the game you want to play. "If your players are having fun," you know the hallmark card advice. But without the real chance of PC death, mutilation, loss of equipment, level drain, etc. aren't you just walking on a really slow treadmill? Wouldn't it be just as rewarding to re-watch Lord of the Rings?

I haven't lost a character since my younger days (although I have come close more than once) because I'm mostly a DM. But I really do not understand folks who say the world isn't immersive if characters die. I'm not a method actor! I'll sit at the table the whole session whether it's my turn or not. My character might be alive, dead, petrified or falling down a bottomless pit, I'm experiencing the game world all the same. If I'm interested in what's happening, I'm focused whether my character makes it through or not. If your players don't care about your game, preserving their characters won't save anything.

I also don't understand how it Disrupts The Story. I just assumed that at this point, everyone on my reading list knew what the fuck a sandbox was. If you need a particular character to survive for the story to work... aren't you just 'playing' a soap opera?

Although there is an "anti-death" point to be made about the quality of a character's dying. Sometimes you're just going to get gutted by a 1hp goblin and that's life, but I fear a lack of imagination or originality in many games sucks the juice out of what could be a memorable event at the table. When you tell the story of Sir Dave, will it be "fell in battle with orcs" or "driven mad by the dreaded hypno-ghouls of K'n-Yan"? Play the game you wanna play, of course. But how many combats have you played in that would've made a really memorable character death?

Gary said characters should have a 70% chance of survival and feel like they have 30%. For my part, I have never had more exciting game sessions than when I was CONVINCED we were all fucking toast. Sure, a tight & well-executed plan that comes off smoothly has a charm of its own, but nothing remotely like pulling victory from the jaws of defeat, surviving against impossible odds. Like playing DOOM without the cheat codes, you cannot get that feeling without the possibility of failure, and in a game about fantasy adventurers that's going to include character death.

If you haven't ever felt this sensation, you owe it to yourself to try playing this way. The sense that a bad tactical decision, lack of attention or even ill-luck could end your character forever is a completely different game.

It cannot be faked.

And the other is just... killing time.

A few voices on this subject, past & present:

Jeff Rients responding to a tweet - and celebrating famous dead PCs  - and advising players on how to escape death!

Noisms wonders about length of chargen vs. player cautiousness - and a Philosophy of RPG combat - and incentives matter

And of course, sport vs. war

Now it's time to celebrate my 100th post with a few fancy drinks. Chin-chin!