Once a staging-point for Imperial military ventures in the region, the town has since shrunk to a fraction of its former population, only farmers and fishermen. Almost all current residents live north of the river in newer adobe buildings, leaving the decaying army barracks-blocks on the south side alone. These decaying buildings can be had for cheap by outlaws, adventurers, eccentrics, and others with a few coins who make it to the last station before the edge of the world. 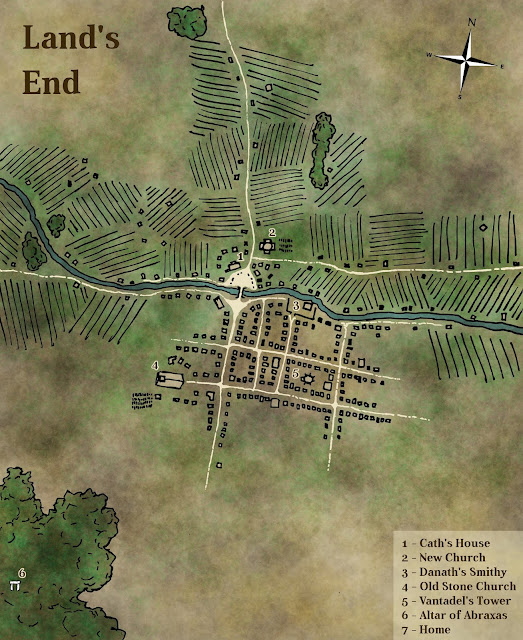 The guys have been based out of this town for the entire campaign. After scouring the internet for a small farming village with a river going through the middle (seemed like it would be an easy thing to find...) with no luck, I decided to draw one myself. Came out half-decently I think, thanks to some internet tutorials - enough to fool my players into thinking I downloaded it from somewhere.

You'll notice there is no 7 on the map for "Home." That's because my players haven't picked out which house is theirs yet. Gotta make em do that before we play next, but I'm still working on the next ultra nasty dungeon, which will be a bit complicated and is taking me a long while. In the mean time, enjoy my hand-cramping digital artwork.