Middenmurk weapon & armour rules AKA Standing on the Shoulders of Giants

So I started using Middenmurk's weapon and armour rules (in case you've been living under a fucking rock, read both of those NOW), because that shit is the bomb. In practise there were a few hiccups, I totally forgot about a lot of the special characteristics in the fracas of melee. The PCs certainly weren't about to remind me that "my guy hits last every round 'cause of his crappy weapon". I definitely need to improve the implementation, but I'll share my thoughts.

Middenmurk has it right. A wider spectrum of equipment is a great idea - instead of having the best weapon and the 2nd-best armour right at first level and having nowhere to go but magic items, you get to start with garbage gear and work up to amazing shit, without going up the "plusses treadmill." This means magic items can be way less common - just the way I like it!

In the spirit of the Peasant Equipment List, here is my first kick at the can:
All prices use the copper piece, same as Middenmurk, cause it rules.

PEASANT ARMOUR LIST
(yeah I use ascending AC, so what?) 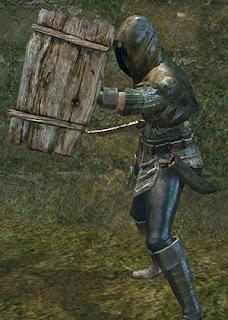 Next I gotta expand outwards with tons of different racial, tribal, and other equipment lists. First up will be the 'wildman weapon/armour list' for a few PCs who are from outside the empire and just use sharpened sticks. After that, we'll have lizardman stone & bone weapons (I imagine them being sort of ancient mayan, so they'll use those clubs with obsidian blades in them), the bog elves' greenish swamp-iron, crappy goblin gear, ancient elven & dwarven stuff from the lost kingdoms (need some effort to keep those from being boring), the charred and rusted tools of the gloom farmers and a ton more!
Posted by HDA at 1:46 PM 2 comments:

The RETURN!! OR A Hard Lesson About Creativity

Okay, soooo I am not playing with this other group nearly enough. And my roommates wanna play Pathfinder again. Thus, we will return to the storied, super-old setting of Land's End with new characters, and I get to throw in a ton of new shit I've discovered since we played last, like monsters from Fire on the Velvet Horizon, MotBM and all that other great stuff!!

We will play Pathfinder again but in order to retain my sanity, I'm cutting out a bunch of stuff and going with EPIC SIX. That's a .pdf download. Read the link and then come back.

If you don't wanna click, it's about "EPIC SIX: The game inside the world's most popular roleplaying game." Player character levels max out at sixth instead of 20th. This idea made me feel great the SECOND I heard about it. All of a sudden I don't have to worry about goddamned teleport, +5 plate mail of etherealness, wish spells, or the fighter rolling 7 attacks per round or whatever. Goblins can still be a threat, and we'll never be slashing through 15 hill giants on an afternoon's jaunt. Every fight matters, and rolling barrels down the stairs at the dudes chasing you can still work. Meanwhile your fighter doesn't need an arsenal of 30 magic weapons to keep up - one cool item could make his career (Wow... Just like in the books! Imagine that), and for that 6th level fighter a legendary artifact could be the same +2 sword that your 13th level dude has piled with 10 more in a corner in his basement.

This keeps stats at a (somewhat, for PF) manageable level, but the boys are happy as hell with the insane level of customizable options at their disposal. Also I can create a world that's at least somewhat fucking comprehensible!

I used this article I found at WWCD? to give me some ideas about how things might have changed. Rivers twisted in their courses, landmarks crumbled or were swallowed up by the lake, things like that. The guys will look around and say "ohhh, I remember what this used to be..."

I'm thinking 50 years later, the PCs that didn't die (or move on to play in different games and level up too far to come back) are now NPCs, retired and/or moved up the ladder of their organizations, pulling the strings from the shadows. This'll make the players shit themselves when they discover what's going on... if they ever do! I will have to reconstruct a few dungeon layouts from memory since I can't bloody find my notes, but whaaaatever man, the point is I'm FIRED UP.


This relates to something I've been pondering recently: why is it I can think about this setting for a day and the ideas are like a firehose coming out of my brain? I struggled for so long to come up with cool shit for Arthur vs. Chthulhu and I think I know why: THEME.

Bizarrely, starting with a strict setting and theme can also be a straitjacket, especially for a guy like me. I let the setting (and the rules, hence Labyrinth Lord, but that's a different argument) creep inside my head and take over my thinking. I guess a lot of us do. With my Mythic Britain setting, 85% of ideas get tossed out because they don't 'fit.' Knowing too much about the setting actually impedes my creativity!

In Land's End, I didn't bother asking or answering many questions about the world. I just started with the RAW races/classes, except monks, fuck them, and drew a map of the first two days' wilderness travel, detailed the town and one or two dungeons. I expanded from there as needed, but that's ALL I KNOW. Anything at all could be around the next corner, and I find I can RELAX a little bit. Themes developed as I continued to add things I thought were cool, because I'm into the same stuff all the time of course, but I was also able to surprise myself, especially using random tables to throw my ideas in a new direction. I was always afraid to ruin things in the somewhat more historical setting, and all it did was cripple me.


To improve on this in the future, we can look at some guidelines to remember:

-bottom-up instead of top-down. Write up what's around the next corner before you spend more than a few paragraphs on the whole world.

-more random tables. EVERY time I do this and get something that makes me go "hmmmm! Fuck, what now?" it ends up way cooler than it would have otherwise.

-stop obsessing. Especially over thematically- or naturalistically-consistent random encounter tables. This is a weird weakness of mine, and there are only 24 hours in the day man.

-player-directed creation. Not only the classic "the guys want to explore the haunted castle, better finish writing it up!" sort of prep (I'm an old hand at that). Also character creation! One of my players, hearing only two minutes of game-world exposition, went off with a cool character concept that expanded the world and made it more interesting. I could have sat around and written that stuff up for myself, but who would have noticed or cared? When the players get into it, the material is instantly relevant.

-Maybe all these rules can be summed up as: surprise yourself. This really shouldn't be news to me at this point I guess.

Enough talk. Play this the next time your players stumble into a Yoon-Suin opium den: