Okay, I haven't posted in a while. Just to keep up a shade of appearances, here is one article so at least I'll have a "2016" entry on the side bar over there. A few of my roommates and buddies went to play AD&D 2nd edition yesterday while I had to work, but it got me thinking about other things I have lying around in the can. Here's a small start:


I got these guys from Castlevania. Fairly simple concept. They are “impossible” to kill permanently - 1d4 rounds after being reduced to 0 HP, a blood skeleton will get up and resume attacking until it's destroyed for good. 1000 experience if you can concoct a method for permanently destroying one. Each time you invent a new method you can get the bonus again. I like putting these near places the PCs might like to linger and check things out or solve puzzles, or maybe just some high traffic area of the dungeon, where spending time fighting them will draw the attention of bigger, scarier problems.

You know them, you love them. There isn't much point in throwing up a picture, you all get it. Call them whatever you like, these cackling troublemakers float around the dungeon ceilings, waiting to harass, torment and eventually kill their victims. Greater Witch-Hags are rumoured to exist, but no-one living has ever seen one.

They carry a long knitting needle in one hand, and a cleaver or butcher knife in the other, wearing long, sweeping green rags that trail behind them as they fly through the air. They love treasure and will hoard whatever they take from adventurers. They attack males first, and when all are dead, will allow any females 1d3 rounds to flee, unless they seem to have especially nice gear or treasure. Due to their prejudices, they have a +4 reaction adjustment with men and -4 with women. They have two special attacks:

1 - Stabbing themselves with their knitting needle, which does 1d4 damage to one target in 60' (the target makes a saving throw vs. death - no attack roll needed). They can do this every round, in addition to a melee attack or their other special ability:
2 - They will cut out their own organs with their butcher knives and send them to attack their victims. Each Witch-Hag can have up to 3 organs attacking at a time. Stats: Fly 90’ (30’), AC 15, HD 1, Att 1, Dmg 1d4, SV F1. The organs can be turned like undead, or if they can be captured the hags will pay a ransom to get them back. They attack by choking, smothering, or even just splashing greenish-black  ichors and humours on their victims. If a Witch-Hag's organ is destroyed, she loses HP equal to the organ’s. I love the mental image of a PC being strangled to death by an animated small intestine. 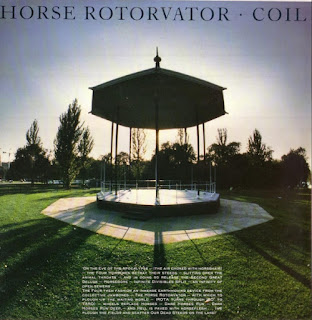 
Inspired by one of the best Coil albums. The lower mandibles of four giant horses, stuck together in an 'X' shape. It rotates and rolls around like a clacking wheel. Can “bite” with up to four jawbones in a round, but because it has to keep moving to make the next attack it can't attack any target more than once per round. It chews & grinds up the floor as it passes, making a CLACKETYCLACK sound. Also, somewhere deep in the dungeon are four murdered horses with no jaws. Creepy. The full-size wilderness version would probably be 150 feet tall with ten times the Hit Dice, as is described on the record itself:

“On the Eve of the Apocalypse – the Four Horsemen betray their steeds – slitting open the animal throats – and in doing so release the Second Great Deluge – Horsegore – (The air choked with horsehair) – Infinite Divisibles Split – An infinity of open sewers.

Now jam these tracks to give your players the proper sense of trepidation in your next dungeon.