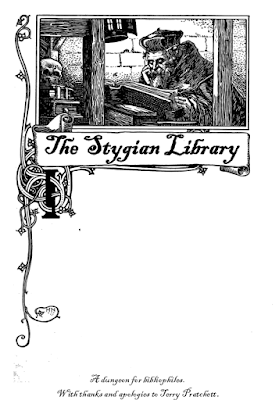 So last time on Nameless Cults, I mentioned the Scribes of Abraxas were related to an upcoming post - here it is! Now we won't have to wonder "what does their home base look like?" or "what do they have on their bookshelves?" Of course I also claimed this post would be done in a week. Whoops! This module just came out in a print version, so I decided to get the review written up and posted.

I had been waiting for this thing to come out. Emmy's last adventure The Gardens of Ynn was not only a new and interesting system for navigating extradimensional spaces but a weird, evocative adventure in its own right. I shoehorned it into my home game, although my players haven't found it yet.

After reading through Gardens a few times, I thought the randomized "Location + Details" system could be used for other adventure locations too... Like an infinite Borghes-ian (am I thinking of the right guy?) library filled with secret knowledge. Immediately I began writing it up. You can guess what happened next: I learned Emmy herself was following up Gardens with a library-themed module based on the same system. At first I was choked, but now that I have The Stygian Library in front of me I ain't even mad.

There is no way I could have developed something this good anyway. I mean, who were we kidding?

[TL;DR - If you liked Gardens of Ynn, just go buy this right now]

Library uses the same "flowchart generation" mechanic as Gardens. The library's layout starts from scratch on every visit. When the players enter, the DM rolls for a location, a detail that modifies it and an encounter with a strange inhabitant. From there, the players backtrack or Go Deeper to discover the next location. Progressing further into the Library opens up stranger vistas as the tables are modified by your Depth score (the number of rooms you have progressed from the entrance). Lurking in the shallows gets you help desks and reading rooms, while high Progress scores reveal dissection theatres, jarred brain storage and infernal gateways.

Using the same system as before allows us to take a more objective look at Library. Since it doesn't have the same the rip-your-dick-off feeling one gets when looking at a completely new and fresh idea, I can focus on the content of the adventure and how it all hangs together without spending all my time extolling its innovations.

Emmy can really go the extra mile in filling out a module. The locales and descriptions cover anything and everything you could want in a library. In addition to the ever-present bookshelves we have catalogues, display cases, storage vaults, printing machines, phantom storage and the dreaded Sheol Computer!

The 'descriptions' section adds the interest and replayability to exploration in the Library. It's one thing to delve a dungeon with a changing layout, quite another when the rooms have different properties every time. Again these are really good: silent, negligible gravity, too small, too large, semi-corporeal and time-locked are a few examples.

Rather than filled with desolate, rotted grandeur like Gardens, The Stygian Library feels lived-in. The librarians (little jawa-like robed figures of 5 different orders - red, yellow, black, gray and white) guard vital areas or putter around, fixing things and attending to emergencies. Researchers and university students wander through. Occasionally a demon shows up to bargain for your soul. Even the random encounter tables change based on the PCs' actions!

The FORTY-piece bestiary is my second favourite part of this module. It ranges from hungry books and dust moths to ink-elementals and neurovores (renamed Mind Flayers). Such a comprehensive list feels like a callback to the style of Red & Pleasant Land: a complete OSR crawl setting in a single book. You could probably run an entire campaign in the Library and (although your players might tire of the scenery) you'd never run out of foes.

While it might be possible to fight everything, it's not exactly the spirit of the module. You're just as likely to be drawn into a conversation with the skeleton cleaning-crew or some talking mice. In this respect the feel is similar to Gardens, which bore the fairy-tale legacy of R&PL quite distinctively.

And the tables! Even if you never run this module, $4 for the pdf is justified by these alone: Types of Books, Extraordinary Books, Treasure, Magic Weapons & their Properties, Rumors, Dreams & Portents... fuck me man. This is what I want to see in a damned OSR product. All the entries are interesting and imaginative, starting from the basics and spreading outwards into bizarre stuff (the extraordinary books especially can change your PCs' lives forever). Thinking of how much work I spared myself on a "random book" table for my embryonic library dungeon, I fairly weep.

So the PCs want information. Where do they go, the local sage? The church? A book club? Wikipedia?

To the Stygian Library! Wherein, an abstracted 'progress system' is included for tracking how close the PCs are to their informational goals. Speaking to the inhabitants about related topics, learning more about the library's layout (such as it is) and finding relevant books will all increase your progress score, which starts equal to the highest INT score in the group and must reach a certain number based on the obscurity of the information sought (20 is basic information in most libraries, 40 is something heretofore undiscovered).

This is a good idea, but I wonder how I would describe this to my players - "You feel closer to your goal"? "You're on the right track"? It's a somewhat dissociated mechanic. The PCs have no choice but to move through the dungeon and hope for encounters/loot that could increase their progress score, rather than analyzing the environment and deciding on their next move.

I suppose that's really my only complaint about this module - procedural generation removes an element of choice. I feel like we're treading into some sort of bizarre double-blind quantum ogre territory here. The players can't plan or make informed decisions, because there is nothing to plan for until the next room is rolled up.

On the other hand, this is ameliorated by the Library being such a sociable place. Instead of learning geographical & tactical information about the layout of the dungeon (a normal exploration-based method), the players interact with the inhabitants to learn about the social landscape, faction allegiances and the rules (social or uh, metaphysical) which govern the place.

Will I use this in my game? Hell yes. Few people are doing this kind of fantasy in the OSR and I'd rather have more modules like this than another grimdark excursion. (I can do those myself anyway). I will throw in some new rooms, monsters and treasures specific to my campaign but I'm sure anybody would.

I have a plan to get my players introduced to the library and they are already on the trail. I really would like to give everyone more detail after road-testing this modules, so don't touch that dial and we'll see about some play reports!

One final caveat: like Ynn, prolonged adventuring in this region could have long-lasting repercussions throughout your game world. Plan your trips accordingly!

Time to visit another dimension. See y'all later!