In a comment on the last Land's End play report, GFC wrote:

[... I'd love to read more about these factions, and your process for prepping these richly detailed hexmaps. Looking forward to reading more play reports!]

Thanks for the commentary, GFC!

My hex-stocking procedure is painfully slow and perhaps not worth emulating. After playing music for 20 years and D&D for closer to 25 (wow!), I have learned a little bit about my creative process. The best bloggers that I read seem to be able to create their own settings top-to-bottom (or nearly so), while I will always be using a lot of existing material, and perhaps stitching it together in an interesting way if I'm lucky.

When I do dream up something creative & interesting, it tends to come damnably slow. Nevertheless, I have fumbled along despite these handicaps and built Land's End in the following way. I hope it may provide some help in your own games.

My basic ideas are not too far from Blair's classic How I key a Hex Map.
There are tons of other guides on the basics of hexmapping out there for those who are new to it, so I'll just leave this starting point here for those who might be interested: Hexcrawl Resources at Ars Phantasia

I began with a mental picture of the campaign setting: a "lost world" cut off from civilization. The adventurers leaving known territory and mapping brand-new lands, scattered with the remains of former empires. I wanted an aesthetic of cavemen, lizardfolk, swamps and jungle ruins. That suggested locations, terrain & possible encounters to start with.

In two years of play, my group has travelled halfway across my 8.5"x11" paper map of six-mile hexes on the long axis, and three quarters of the way on the short axis. They have by no means seen everything within that area, either (as you can see on the map above). I usually only have 20-ish hexes stocked that they haven't been to yet. Just enough that I have my bases covered if they take a wrong turn. I come up with new locations quite slowly.

What helps is that travel in jungles & swamps is slow - the players can't get far in a day even at light encumbrance (they take pains to never get weighed down with too much stuff) so I only need a few extra hexes stocked in any direction. They often revisit the same adventure locations multiple times for various reasons (strategic chokepoints, stocking up on resources, landmarks and paths through the jungle, to say nothing of repeat dungeon delves). The region is small but has become dense with connections and history.

I have praised d4 Caltrops before on this blog. A huge number of my hex locations are from his "100 Wilderness Hexes" document. This thing is fantastic, so check it out. Many of the hexes interconnect with each other (especially the swamp hexes), which adds further layers of adventure possibility. I have taken many of these and spun them into a whole game session, or connected them to something across the map for my players to go check out.

You might have a few modules gathering dust on your shelf that you'd like to include on your map. So far I have added the The Tomb of Abysthor, The Spire of Quetzel and a few two-pagers from the excellent Trilemma Adventures compendium.

Modules aren't just useful for saving time. Each one added to your setting can be spun off into new elements if you put a little effort in. Using The Tomb of Abysthor for example, I reworked the included wilderness locations into larger, more detailed locales. I created more NPCs for the cult of Orcus and the Tsathar, spread them around the hexmap, added them to the region's encounter tables and gave them new lairs, dungeons, motivations, things to do, equipment & treasure, etc. All of a sudden, a single dungeon module has added a new layer of texture & meaning to the world. Even if they never set foot inside, the players will get involved with the dungeon's factions and NPCs one way or another. Do this for three or four modules and you should have a whole campaign's worth of material in no time.

Sometimes you get stuck, and that's OK. Judges Guild is here to help: go get the Wilderness Hexplore Document. Compiled based on material from the Ready Ref Sheets and elsewhere, it amounts to a complete random wilderness stocking system. I don't use it that way exactly - I roll on it for ideas when I can't think of anything. It gives just enough detail to jog the mind into doing something new. You might also try the Tome of Adventure Design, some of the tables at the back of the DMG, or another of your favourites.

I was stocking the Drowned Lands (the great swamp at the centre of the hexmap, where the lizardmen live) and after 20 or so hexes, I felt a bit gassed. I opened up the tables and this is what happened:

Rolling on the feature table on pg. 8 gives a result of 7 - Temples & Shrines. I roll for the temple's size & shape (an obelisk of metal), age, number of followers, type and number of leadership, treasury (very important for PCs), the type of shrine (a holy statue), defensive measures and traps, effects of defiling the shrine, the deity's sphere of influence and plenty of other things. Occasionally results need to be tweaked to fit the system (there are no 11th level clerics in Land's End!).

Rolling for the deity's appearance resulted in these traits: goddess; elf; alien; wasp wings. That sounded familiar, so I dug through the Book of the Damned (one of the few Pathfinder books I actually like). I found the Oni Daimyo pictured below, whose divine portfolio matched some of the random table results and gave me more useful details. Jumping back & forth between various books like this really works for me. 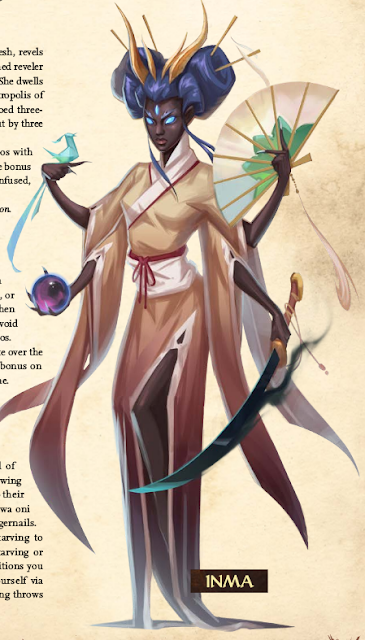 Putting it all together I get this basic hex info:


Hex 0612 -TEMPLE OF INMA - Obelisk of unknown metal, surrounded by 40’ walls adorned with tallow candles & reed torches. 23 chthonian elf worshippers inside, led by triumvirate of priests (Cle 2nd, 4th, 4th). Statue of goddess Inma, "The Empress of the World" has three eyes, four arms, alien features and wasp wings. An obscure demoness of blood who bestows wealth on worshippers when appropriate sacrifices are made. The temple is rich and fanatical.


Ceremonies: Regularly at dusk (all - public, lizardman blood), midnight (high priests - public, platinum) and dawn (high priests only, copper). Special ones - a month of fasting and prayer, the longest day of the year, goddess’ “day of death,” death of a high priest.


This only leads to more questions. Who built this place? What is the obelisk actually made of? What do Inma's worshippers want with treasure, anyway? Where do they get the coinage for their sacrifices? Why risk death at the hands of lizardfolk? Are the clergy isolationist hermits, or will they deal with the outside world? How are relations with the lizardfolk who (at least nominally) control the whole swamp? Are they apostates from chthonic elf society, or does Inma have a place in their larger pantheon? How will they react to the PCs: as allies, enemies, potential sacrifices or something else?

Answering these might result in a dumb adventure location or something fun & memorable. The effects might spiral outwards and change any number of things in your game world. I don't have it all figured out yet. The important thing is that I now have something I wouldn't have made up myself, and I can flesh it out and see where things lead. The setting just got slightly more complex, more textured.

The Wilderness Hexplore Document is quite wide-ranging. It could just as easily have given me a ruined bridge; a sunken canoe guarded by giant frogs; or a castle with a samurai and his djinn servant (I have rolled all these before). Adapting & reskinning the results to my game world is always an enjoyable exercise that expands my thinking about the setting and fills in details that I otherwise would never have included.


Putting it All Together

This is where two DMs with the same raw material might run completely different games. Remember that aesthetic I mentioned earlier? I think of it as a filter. Everything I use from a module or blog, everything I roll on a random table - it all gets filtered through my own view of the setting, tweaked a little bit until it gels, and then set down.

There is no strict hierarchy or step-by-step procedure to follow. I like to bounce around between all these options as the mood strikes me. When I get stuck, I change my approach and continue. At a certain point you have to trust yourself to make the connections, to adjust elements to fit into a larger structure that only you can see.

I hope these examples are useful. Read the links, because those guys usually say it better than I can. If I missed something, let me have it in the comments!

It's funny to be writing about my wilderness hexcrawl while I'm neck-deep in keying a gigantic city sandbox for a different game with some new people. It's proving to be quite the unfamiliar challenge!

And now for a bit of classic '90s gaming music.