So I stumbled across this somehow.
Probably on MeWe, where I follow some cool kids.
If you use it too, add me eh?

From that link I checked out several different monster generators on a few blogs, including some linked from the comments. Here is what I discovered: 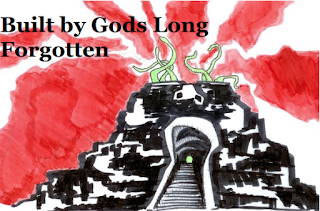 Released as PDFs, one for each monster category (as delineated by Sham here). These are wild. I really wish they were compiled in one giant pdf document, but they were written years ago so what can you do?

Each one consists of a single page. They basically strip apart the traits, characteristics & special abilities of a particular category or flavour of monster, and spread them out across a series of tables. Each one is different, and the formatting & layout are all over the place. Let's look at the categories:

-"Beasts" of Fey Woodlands: animals with fairy tale abilities
-Humanoids of Fey Woodlands: elves, pixies and the like
-Dragons, Dragonesques & Chimera: an odd one, dragons share a page with grab-bag mixed animal shape beasts
-Esoteric Animals: random mundane animals with strange abilities
-Gorgons, Lycanthropes & Gargoyles: any monster that turns you to stone, or changes shape
-Humanoids: people-types, where they lair, what they look like and some of their behaviours
-Humans: for determining the size, composition and traits of a human fighting force
-Slimes, Molds and Jellies!: just like it says
-The Otherworldly: elementals & similar beings
-Undead: you get it

Let's have a few examples.

This is good! A pack of bandaged-up children's corpses that can summon a horde of rats! Very Silent Hill. Perhaps they have a hive-mind and are treated as a single creature? Creepy.

A great cat with a dragon's tail & wings and a fanged mouth instead of a head? That sounds hella gross and pretty cool. I am imagining a great cat-version of the Gaping Dragon from Dark Souls. I imagine it might be able to swallow a halfling whole, but not a human. Still would make a great abomination for the heroes to fight!

I must say that these really exceeded my expectations! A little recombination of familiar elements can yield cool results, and I would happily use these monsters in my game. If I had a complaint about these generators, it would be a matter of scope. The undead table will only give you undead, the slimes & molds table will only give you slimes & molds. The tables seem to only include possibilities that already exist in the monster books, and few (if any) new additions by the author. You won't find an undead monster with a breath weapon or an ooze that can drain levels. Also, these pdfs are laid out a bit crudely and are sometimes tough to parse, if that's important to you.

Having said that, the results you get are pretty damn cool. If you want a lightning-fast generator that'll give you a monster blending familiar elements in a new way, these will do that.

How Many Rolls: Lowest is 3, most common 5, highest extreme for one of the pages is 14.
Would I use these in the middle of a session: Yes. The upside of using familiar elements is the short learning curve. If I needed a monster was just a bit different (instead of completely crazy like what the RECG turns out), I could easily turn to these tables.
Variety and Reusability: Limited variety. But the reusability is good, as you can mix these basic elements together extensively.

SAVE VS. DRAGON
d30 Generators - there are quite a lot of them. If you just want the monsters, better to go to the post on DIY and dragons linked at the top, which links the monster generators individually.

This guy has a TON of different generators. Mr. LeBlanc also wrote the d30 Sandbox Generator (which I quite liked and perhaps should review some day soon). For now, we'll stay on topic with the monster tables. LeBlanc has done so many of these, they are all small one-page affairs but each one is a really nice-looking pdf, laid out cleanly and professionally. Far better than I could do in a month, and he seems to knock them out in a day! I found 29 of these one-page monster generators in a few minutes on his site.

They seem to take a few forms. For humanoids (bandits, elves, dwarves, berserkers, goblins, gnolls, things like that) there is a standard layout. The first table is "Group Background/Descriptions," with motivations and organizational cues for the group, like "explorers: lost as a result of a dwarvish prank" or "tribal unit/thugs: seeking slaves." This is a good start. Then we have "No. Appearing," which doubles as a leader/champion generator. Then "Arms/Armour/Mounts," which offers a bit of variety (orcs with flails riding dire wolves, or orcs with axes & crossbows? etc).

This is a basic template which is departed from in some cases: the orc page has an "Orc Tribe Name" table (like "vicious bone" and "baneful axe"), the berserker page has a "Celebrate Victory By..." table. These add some welcome colour if you're stuck trying to think of something.

Other creature types have completely different generators. Generally the less humanoid the creature is, the more different its page. I approve of this. The Sea Creature Generator comes with nice little pictures to illustrate various aquatic body shapes, and an old woodcut in the corner of some great beast smashing a ship. The Fiend Generator is the only two-page entry, and looks fun. Let's try a few:

Huh, that's quite detailed! I'll wager this would add some excitement to your "(3d10) Men, Berserkers" on the standard encounter table. Maybe the party comes across them just as they're be-handing a few victims and tying up the survivors as captives? Or maybe they carry the severed hands of their victims on big garlands? Either way it's going to be harsh!

I love it! This can go on the shelf with Appendix D, which I reviewed in the very first edition of RMGS! This monster is very difficult to picture, which is honestly what I want in a demon generator. I will 100% use this, guaranteed. Top tier. Seal of fucking approval.

How Many Rolls: Many are only 3 rolls. Some only 1. The most complex might have 5 or 6, except the Fiend Generator which has 15+!
Would I use these in the middle of a session: Fuck yes. Not the Fiend Generator though, it's in a class of its own.
Variety and Reusability: Well. If you have stuff like Berserkers, Goblins and Orcs on your encounter table, there is simply no reason not to use these! Having said that, these tables don't really 'interlock' like some random monster generators in a way that would give you 13,000 possible results or what-have-you. What they can do is add variety & interest for those bog-standard monsters on your encounter table that we're all used to. Go check them out! 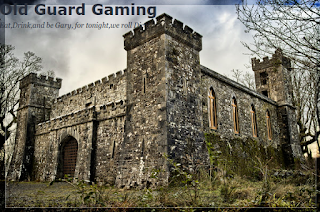 This blog has been around for a long time, and I never came across it. It's really good. I'm just going to quote Palmer at length here:

"...I make a distinction between monsters (species in the Gygaxian Naturalism tradition), and MONSTERS (unnatural unique creatures which don't have to follow the rules of Nature). I employ both in my own Greyhawk, and my players can never be certain just what the hell they're up against in any given encounter. It adds spice to the game and checks the overconfidence that leads to complacency and boredom. Dragons especially seem to get over-defined in the game. Ancient and medieval dragons were extremely varied in form. Like elves and goblins and such in myth, they were rarely described in the same way consistently.
A randomly generated dragon will bring to your game some of that fear of the unknown which was the norm for people before the reign of technology."

That's what I'm talking about. This generator randomly determines age, size, hit dice and attacks like you'd expect. Also there are tables for special attacks & defenses, unique breath weapons, colours, special motivations and other strange things. I'll just show you with an example:

Wow, what to make of this one? A construct dragon with a monstrous mate? Perhaps it's a fleshly dragon-golem of some kind, created or commissioned by its mate for companionship, like the Bride of Frankenstein? Maybe a robo-dragon that found another robot to team up with, and they're building a new monstrous "child"? I could just throw this thing at my players, or I could sit down and explore the possibilities. Seems like there is a whole adventure or two in here if you want it. Awesome.

How Many Rolls: 26-32!
Would I use this in the middle of a session: Hmmm it's pretty long. It wouldn't be my first choice under time pressure. If I needed a dragon that quickly, I'd use stock stats and roll on a few of these tables to turn it away from the norm just slightly.
Variety and Reusability: Well... you're going to get a dragon. But since dragons are normally all the same, I'd say you could reuse this basically forever!

I thought this series had run out of steam. I'm glad to be proved wrong by folks releasing cool things on their blogs. No glossy books or fancy production values (well, LeBlanc's pdfs are a bit fancy).

If I could only pick one favourite, it's a toss-up between LeBlanc's Fiend Generator and the Unexpurgated Dragon Generator. Obviously the utterly bizarre multiplicity of demonic forms is a topic very close to my heart. But that dragon generator, man... it's a thing of beauty. The fact is that I will use almost everything I looked at today (except the orc generator, because I don't have orcs in my campaign setting!).

Well this has rambled on for quite a while. Time to relax!!