Well, it's that time again. Yule logs are crackling, a new Star Wars movie is out, I have to field calls from my relatives asking when I'm going to get my life together. But first let's look at how things went over the last year.

I wrote fewer posts this year mainly because I had other creative projects to balance, like starting a new campaign with some brand-new players. One of my bands recorded a new record so I spent most of the spring & summer practising really hard riffs that nobody will ever listen to! The Land's End crew still gets together about once a month for wilderness exploration and the players are having a great time. I'm learning a lot about the sandbox format in every session. 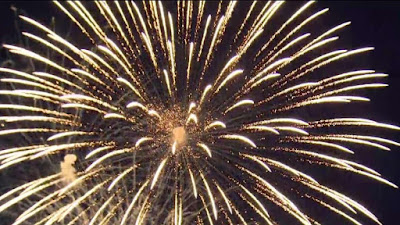 Why the OSR? / YOU RECOGNIZE NOTHING - As soon as I said I wouldn't get mad... We haven't been back to game with this group, for a handful of reasons including those I enumerate in the post. Sorry I got so pissy, but this post reached a LOT more people than my blog usually does, so I hope at least a few of you who came for the yells stayed for the skeletons and random tables.

Review: The Stygian Library - Not much else to say here, this is a great module. I will post a follow-up play report once my players have explored it. They're very close now, and I hope my personal touches don't twist it too far out of proportion.

RMGS Round 3 - My second-favourite of the series after Hyper Diabolism Edition. I break down the monster generators in the Tome of Adventure Design, Carcosa and the Gardens of Ynn.

Tomb of Abysthor - pt 2 - The Pit of Bones - Part of my ongoing attempt to adapt that venerable Necromancer Games/Frog God adventure for my home setting and rules. I'm glad people read this post, I'm proud of this little bit of my setting!

Return to Land's End sessions 8 & 9 - The most-read of my play reports! I'm glad someone likes these although I've fallen off writing them of late. They take too much time, I'd rather work on new material for my game. Maybe I can do more point-form reports that contain all the essence of these writeups, but take less time? I don't know if they'll be very interesting to read.

REVIEW: Library Generation Table & Locks, Vaults and Hiding Places - and a blurb - I wonder why more people didn't check this one out? I suppose there isn't much point in reviewing something that's PWYW on DrivethruRPG, folks can just get it for free and see if they like it.

Didn't get around to playing Warhammer with my group at home.
Posted less than I did last year.
Wrote more angry rants than I wanted to.

Wrote a lot of reviews!
Wrote my 100th post!
My own writing made it into a printed book!
Started a new drop-in game with some players brand-new to D&D!
Refrained from publishing some of the angry rants that I did write!

Land's End: The Tomb of Abysthor remix is progressing, the group have ventured inside and battled the relentless skeletons of the Font of Bones. I have edited the first two levels in an attempt to stay at least one whole level ahead of my players at all times, but the lower levels will require much MORE work than higher ones! The entire frog level basically needs to be deleted or completely rewritten for E6, same with the temple of Orcus. Meanwhile they are following up clues to the lost temple of Mordiggian the Charnel God, and about to venture into the drowned lands where the lizardfolk live!

Viridistan: My new drop-in game is set in & around Viridistan, the City-State of the World Emperor. After watching what Ben L. did with the Wilderlands for his game, I was inspired to read up on it. I have placed Land's End there so both games take place within the same world. This one will have less wilderness adventuring. Instead it focuses on cults, conspiracies, city adventuring, socializing, random tables, and reskinning all my LotFP adventures with a more Swords & Sorcery theme. In other words, only & entirely things I've never done before! So expect catastrophic failure, or at least some hilarious gaffes along the way.

Fun on the Velvet Horizon: A few of these are in progress, hopefully they'll be done this year.

Summoning Rules: My adaptation of Ben L's awesome monster-summoning pact rules will hopefully continue this year. This is closely tied with FotVH of course.

Nameless Cults: More of these will be added. I have selected six of the seven demon-lords that rule the forces of Chaos in Land's End. Further development on the cults of Orcus, Tsathoggua, Abraxas and more is upcoming, along with some antagonists that aren't 'infernal' so much as 'extraterrestrial'...

More new material: I have written a few original dungeons for Land's End that crib from my favourite bloggers less than usual. Nothing to make a big deal out of, about the size of a dungeon from Fight On! But if my players have fun playing 'em, I'll reproduce them here for you guys to check out.

Reviews: Well, I did buy a fuckton of new gaming books this year! It'll take me a while just to read em all. I'll write up a few just keep my hand in, you understand. I am so busy that I would rather dedicate my limited blogging time to playable things for my setting. Still, if I can drive a handful people towards a really cool product, that's worth doing.

Review, Remix, Repent: I am teeing up on a controversial, well-reviewed but much-maligned module, one which perhaps fell victim to the hype surrounding it. I am attempting to extract the interesting parts. We'll see if it ends up being more work than it's worth, and who wants to lynch me after.

Email ThisBlogThis!Share to TwitterShare to FacebookShare to Pinterest
Labels: 2019, personal