This almost brings me up to date. Still a few random encounters to go. We'll see what happens this friday...

This time, the party explored the abandoned white towers of the snake-men. They scooped up buckets of treasure and sweet items, uncovered strange secrets and had some tense fights. Let's review the highlights:

-At the bottom of the first tower was a complex relief carving circling the room depicting the various orders of life: at the bottom layer, the lower animals (dogs, crabs, monkeys). Standing above them were the humanoid races - humans, dwarves, elves (although they didn't look much like the wild elves of Vuk Thuul's tribe), orcs, gnolls, ogres, crabmen, etc. [In fact each of the species carved here has a preserved member in a tank in the room above. The PCs didn't quite notice that.] Above and behind these were seven hooded, long-necked figures [the snake-men of course]. Behind these, three strange tentacled monstrosities with gaping mouths. Above and behind them all, reaching to the ceiling, arose a great swirling pillar of eyes with two enfolding wings and a long outstretched neck, terminating in a shapeless, faceless head.

-In a room lit in sickly green and pink by a luminescent jelly cube, they were ambushed by a CENARACH! Poised to strike from the ceiling, Leliana beat it on initiative and used her slumber hex, knocking it out but leaving it stuck above them. Nahash managed to poke it with his spear, but the real money move was Vuk Thuul Command-ing it to "drop!" On the ground, its corrosive bite and claws made the oracle's life difficult, but he managed to avoid the worst of it with some lucky rolls (no CON damage), breaking its neck with his lethal constriction ability.

[Vuk Thuul's wrestling skills are absurdly good. But as we'll see, any PF character with exceptional abilities in a certain domain will inevitably run into situations that render their "build" useless.] 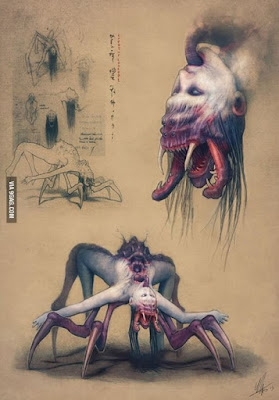 -In the buried passages underneath the towers was a storeroom. Somewhere, a thumping sound was detected. It turned out to be a TROLL CABINET! Chop a troll up and put the pieces in various drawers. Open them up and the pieces will try to reassemble themselves. There were some frantic moments, but once Nahash got a torch lit they put that old troll in its place and ransacked the storeroom for strange items and curiosities to sell back in town.

-They crossed the narrow bridge to the second tower and entered a strange ritual chamber. A seven-sided altar carved with a network of channels led into the floor. On the wall above, a carving of a skull-headed snake-man with a gigantic forked sword, poised to strike. A little experimentation proved the channels were for carrying sacrificial blood into the floor and down to the room below.

Descending the stairs from the ritual chamber brought an odd sight: the party was looking DOWNWARDS into the open sky, from an observatory at the top of the tower! After parsing this strange vista they decided to take the stairs in the other direction.

-Upstairs was a room with seven grand sarcophagi, six of them carved with strange scenes and symbols. One depicted an underwater cave, another a field of mushrooms under a strange sphere, one more a giant sword wreathed in flames. The first one the group tried to open was carved to resemble a snake-man skeleton, the ribcage spreading and reaching outwards as if to grapple.

Inside lay the loose bones of a snake-man champion of chaos. As it had served its demonic master in life, so its carcass did in death. The bones animated in the shape of a long skeletal serpent and attacked as a necrophidius! [and this is where things got dangerous.]

Nahash was dazzled by the necrophidius' hypnotic dance. Leliana grabbed him and everyone began running away as fast as they could. Vuk Thuul cast Monster Summoning I, calling a pony to assist him in his fight. Very quickly it became apparent that summoning ponies was good only to distract the bloodthirsty monster for a round or two, but since the oracle had plenty of spells left, this became a viable strategy!

Beating a desperate retreat, the party turned to face the onrushing monster on the narrow bridge. Using the last of her spells, Leliana Enlarged Nahash, and with a strength born of barbaric rage, the lizardman body-checked the construct right over the side!

Unfortunately it fell sixty feet and didn't die. Still Enlarged, Nahash sprinted back across the bridge, dragged the sarcophagous lid out of the burial chamber and dropped it down on the skeletal snake. Narrowly making his fortitude save to avoid a hernia, he collapsed on the bridge from exhaustion - the party was safe.

Plenty of other secrets were unveiled, and the towers aren't fully explored but the party couldn't carry any more loot and decided to get out while the gettin' was good.

-an untarnished silver snake-skull mask, sized for a large creature
-two giant metal spearheads
-bone sickle
-whip made from the vertebrae of an unknown creature
-a ton of stuff I swiped from the Submerged Spire of Sarpedon the Shaper
-ornate two-handed sword sized for a snake-man [far too big for anyone to use]
-an alien orchid, preserved in a jar of vivimantic slime

Now for a slightly different kind of jam: