I haven't been too loud on the blog for a few weeks, but plenty of gaming is happening over here. The Land's End crew is halfway to fourth level and very busy indeed - they raided the twin snake-man towers of science & sorcery, stole some ancient technology and just committed their first "war crimes" against the Neanderthals!

I also started running some LotFP adventures I have lying around with a gang of newbies. The first session was a blast (we played No Salvation for Witches) and I'm working on a follow-up. Maybe I'll talk about it all sometime but I find regular narrative play reports a bit tiring to write and they aren't nearly as exciting as those old Planet Algol ones I loved so much.

These days I'm running out of random monster generators to compare. Instead I want to dive deeply into a book that really blew my mind: 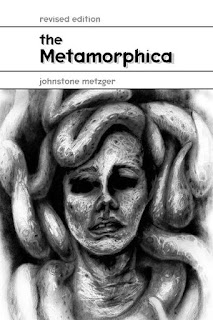 I remember perusing the Metamorphica Classic (still free to download right here) and thinking "yeah, this is pretty cool." The revised edition has updated that sentiment to a well and true stoking. This book is like Frank's Red Hot: I want to put that shit on everything.

It's sort of hard to review because it's so fucking large. Even ONE section from this 269-page beast would be a useful book in its own right. The Metamorphica Revised has it all: Tables. Tables of other tables. References. Sub-tables. Categories of other tables that refer to sections of larger tables. Mutants. Science. Plant monsters. Psionics. Super-heroes. Demons. Animal-men. It's all presented in a comprehensive way and organized so it can be used for various applications depending on your game (more on this later). There are no stats provided, everything is system-neutral. Normally I would hate that but it works here as you'll see.

The main body of the book is the d1000 mutation table. Metzger gives us many ways to use it. We can roll a d1000 if we want but the various mutations are grouped by type, allowing us to roll through numerical brackets to get something particular if we want a physical, mental, psychic or supernatural mutation.

The entries themselves vary widely and are too numerous to list (they go on for 111 pages). Many entries are 1 in 1000! Simple stuff like "herbivore," "multiple heads" or "kidney stones" sits next to weird shit like "heal brain," "bag of creatures" or "demonic phenomena" (a four-page d200 table on its own). There are more results here than I could ever use. No statistics or numbers are provided, leaving every DM to adapt or create rules for each mutation in their own game.

The only gripe I can think of is that Metzger included ANYTHING AND EVERYTHING he could think of on this table. I am not sure when I'd find a chance in my game to straight up roll d1000 and play through. But that's okay, because the next sections show us how to use the book in even more ways:

This is where this book really shines. This image is from the beginning of the book, but it conveys the idea. Check this out: 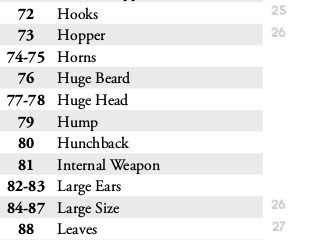 Do you see those grey numbers along the side? Those are PAGE NUMBERS. All the tables are like this! Can you imagine what a bitch this book would be without them? Indexing like this makes it worthwhile to recompile the giant d1000 table in different ways for various applications, as Metzger does throughout. Physical and mental, beneficial and detrimental mutations are grouped up so you can get something for your purposes instantly.

This is where the book really gets awesome! Metzger recombines elements from the great d1000 table in new ways, and offers brand-new entries to serve a specific genre.

After The Fall - Tables for your post-apocalyptic mutant game. Mutant plants, beastlings, hyperevolved animals, pages of new tables for generating mutant hordes, and a whole d1000 table for the scavenged detritus a mutant might carry around.


The Ficto-Technica - The longest themed section, this one is totally mental and took me a while to get my head around. An abstract system for generating science-fiction devices and magic items, it works by combining prefixes, suffixes and descriptive terms to name the item and leaving you to decide what it does. Combinations are sorted by type of technology, like 'the corrupt arts,' 'the pure sciences' or 'genotech.' The magic item tables come right at the end and include guidelines for living or demon-possessed items, magical armour & weapons and strange magical gear. You won't find any +1 swords, and like the rest of the book you'll have to do the heavy lifting after the tables give you the kernel of an idea. Want more Goblin Punch-style artifacts for your OSR game? You could do a lot worse than this.


Popular Science - This section is short and sweet, mostly consisting of brand-new tables. Procedures for creating space aliens, comic-book superheroes and anthropomorphic animals, along with guidelines for rolling up mutations on the main table based on what kind of scientific experiments you were subjected to.


Swords of the Chaos Lords - This is basically Realm of Chaos part three and for my home game it's worth the price by itself! Much will be old hat to anyone familiar with those venerable Warhammer books. Guidelines for creating infernal sorcerers, demons, chaos champions and - you better believe it - chaos spawn. Most of the tables in this section point to existing mutations from earlier and group them up in different ways. Tables for the ill-effects of infernal sorcery, summoning mishaps, demonic motivations and a full d1000 table of bonus 'infernal characteristics' round this section out.

As an example, let's create a Lesser Demon. This is complicated and comes with some 'default' mutations like Immune to Disease and Immune to Poison, but I'll stipulate to those and assume that you know what the 'outsider traits' are in your own game system. This is what I rolled:

Body: Cactoid with the head and left foot of a dog


Superhuman strength
Invasive
Increased metabolism
Inhuman features push through this demon's skin when it is angry, wind and storms follow this demon wherever it goes, prayers or declarations of love cannot be spoken, vehicles crash and spin out of control.


Motivation: Inspires the careless expenditure of resources, so they are used for no good purpose.

I dare you to put this thing in your game and not have a memorable session at the very least! I need to roll up its magic armour, so let's flip back to the Ficto-Technica:

That's a fantastic magic item! It might even be worth tangling with this dog-headed cactus demon. I think a DM that drew on these tables for demonic antagonists would start triggering acid flashbacks in his players pretty quick. I want to play in that game.

In a word: thorough. Absurd breadth and variety, collected and organized. Procedures and ideas tailored to the genre you want. For such a massive database, Metzger really knows how to make this thing usable and easy.

A few minor quibbles: there could have been more page references when the book directs you to a distant table, which happens a lot. The grey page numbers along the sides of the tables are a bit faint in the print version, it actually took me a while to notice them. And an absolutely demented degree of cross-referencing does sometimes happen.

How Many Rolls: 1 or more... sometimes lots more.
Would I use this in the middle of a session: Depends on the application - there is a LOT of cross-referencing and page-flipping. You might want to get some sticky tabs. To generate a new creature, no. For its intended purpose of mutating your characters, hell yes!
Variety and Reusability: Approximately 1 lifetime of gaming. "Creativity aid, not creativity replacement."


Johnstone Metzger, I bow to your dark genius.
Posted by HDA at 7:46 PM