I have been writing these play reports for my online Labyrinth Lord group, set around the City-State of the World Emperor. Since I spend so much time on them, I thought I'd share them here for everyone to peruse. This session actually took place last year, before we switched to online play a few months ago. This weekend we're also returning to Land's End - the fun never stops.

As one of my players said the other day: "your world has more shit to do than the real one right now!"

After their torchlight exhumation, the gang re-interred the corpse of James Blake with a mocking note, taunting whoever might come searching afterwards for his journal and The Great Devourer.

"Meet on the 10th of Blackmoon in Viridistan. Under the Grand Red Statue, look for the man with twelve lit candles." 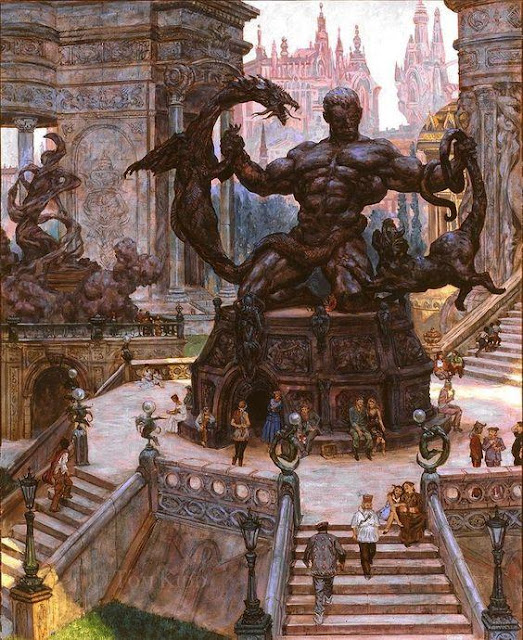 After recollecting their previous adventures, they decided to follow up a lead at the port of Targnol a few days travel away:

"The rich merchant Philotheos Sten hasn't been around lately. His large estate lies on the edge of town, and nobody has been seen coming or going for several days. Some fear the worst while others remark on the man's riches, accumulated through a lifetime of trading. A few thugs are going to case his place soon. You might be able to beat them to it and see what kind of loot is lying around!"

The port of Targnol was a sprawling mess of crumbling wooden buildings packed with Imperial sailors on leave, dockworkers, merchants, thieves and cutthroats. Notable buildings included a grand temple to Thoth and a mysterious black pyramid containing a sleeping sorceress within a glass coffin. The town offers a standing reward for anyone who can reawaken this mysterious ebony-skinned woman.

Not having an interest in that, the gang met with a local contact of Two-Faced Humphrey's (he had business back in Viridisan, and couldn't accompany them). The man was a sullen and scarred Viridian named Komang. He gave them some basics, and a few trips around town asking questions filled in the blanks:

- Philotheos and his family hadn't been seen in two weeks, but there had been no surge of activity suggesting they were moving house or taking an extended vacation. The current theory was sudden illness or foul play of some kind.
- Old Graham's Gang, a strange and mysterious crew of all-child thieves from the capital about whom rumours have swirled for years, were casing the place. They planned to raid it for valuables the next night. Komang offered to put the party in touch with them, but this offer was declined.
- Philotheos kept no personal guards, for he lived on the edge of town in a rich area patrolled by (notoriously lazy) Imperial troops.

The party pooled their money and bought a wagon and two horses. On the way up to Philotheos' mansion, Eric and "Sir Karavon" drove while the rest hid under some straw in the back, hoping the "knight" and priest would discourage prying eyes or nosy guardsmen.

As night drew down they pulled into the driveway and approached the great mansion. Disdaining to explore the large grounds, "Sir Karavon" knocked on the door and getting no response, opened it. A distant weeping could be heard, but no foes presented themselves.

The party entered the lightless home and progressed through a set of double-doors into a large parlor and dining-room. The place was trashed. Plates and vessels broken, splashes of blood everywhere, and the source of the weeping: a young Viridian girl strung up to the chandelier, her innards hanging out in a bloody mess! 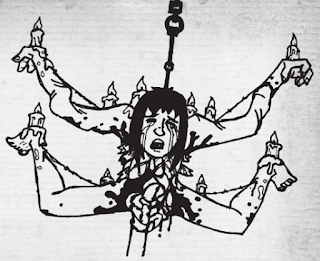 In terrible shape as she was, the girl regained some lucidity after being released from the chandelier. She told them her name was Ariel, and related a strange story:

“One night after dinner, Father told everyone that he had a very special present for Mother. It was a very pretty necklace! But then a big monster and two smaller monsters came out of the necklace! And the big monster told the smaller monsters to get the lovers, and they jumped on Father and Nanny Alba! Then Mother and Grandma started yelling at Father, and everyone ran away! Then Grandma came to get me... and now I’m here.”

The child's injuries were quite severe and the party wasn't sure if they could help her. In the meantime, they explored the dining room and parlour, spotting an oil painting of a newlywed couple with a copper nameplate that read:

Mounted on the wall above the painting were two fine-looking crossed falcatas that looked functional enough. The group took all these items and left Ariel for the moment to continue exploring.

The two other rooms on the main floor turned out to be Philotheos' office and a conservatory. The centrepiece in the conservatory was a grand harp, and three statuettes of dark blue & yellow marble rested on the mantelpiece: a dragon, eagle and nymph. The group took all of these and loaded them into their cart.

In Philotheos' office, Lothos rifled the great oak desk and found stacks of business papers - deeds, shipping manifests, etc. He pocketed a stack to peruse later, along with a fine stiletto in one of the drawers. The group was drawn to the large, shining silvery cube in the back corner which turned out to be an advanced combination safe! Three number-wheels ranged from 1 to 20. After giving it some thought, they fetched the painting of the Stens' wedding-day from their wagon. Guessing that 17 and 8 were important (Sunstrong is the 8th month of the year), they tried a few combinations until hitting upon 17 - 8 - 1. The shining door swung open and revealed Philotheos' hidden fortune!

It was at this time that Lothos thought to consult the mysterious ancient tome in Eric's possession. Pricking his finger, he wrote on the pages in blood, describing the party's situation and what they knew. Oddly, the book had a ready answer! This disaster was likely caused by the gift Philotheos gave his wife. The book identified it as The Necklace of the Sleepless Queen. It was created long ago by someone called the Dead King, to destroy all love in the world.

Perturbed by this news and not wanting to meet Ariel's sadistic grandmother or the "monsters" spawned by the necklace, the party elected to start the mansion ablaze and retreat safely with their wealth. Aladar IX used his Unseen Servant to carry a torch around inside the house while the others barred the door to prevent any aberrations from escaping. They waited until flames were visible from outside, then rode out of Targnol full-tilt, their wagon full of loot. 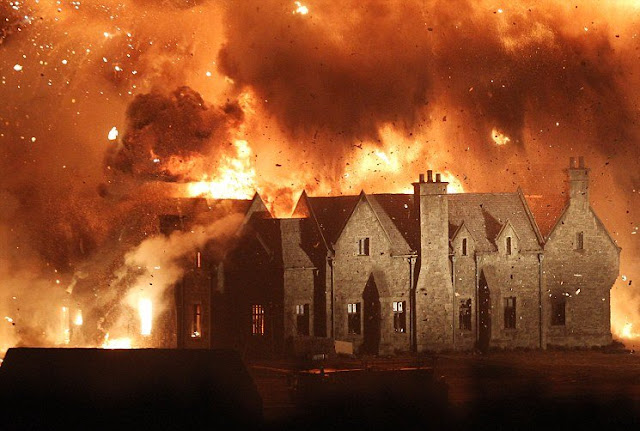 Return To the Immortal City

On the road home, Lothos consulted the strange blood-drinking tome again, learning its name: Pheldrazash. It claimed to know many other secrets, and was willing to teach him and Aladar IX a spell that would expand their knowledge for free: Call to Familiar Spirit.

Two days' travel from Viridistan, the party approached the Great Wall: a colossal structure a quarter-mile high and 200 feet thick, built by the ancients in the dawning days of the world for reasons unknown to men. Approaching the eastern entrance, called the Moon Gate, they met a farmer on the road who told them a strange tale:

"Not too far from here, a brand-new building has sprung up overnight! It's a great structure in a bizarre foreign style, red stone and dark wood with a peaked black roof and pointed square towers, set back from the road on the edge of the Elsenwood. Travellers say it simply appeared one day with no signs of construction, no work crews, and certainly no negotiations with the elves who make the woods dangerous for honest Imperial folk!"

After hearing that rumour, the gang pressed on towards the City of Spices, glad to be home after their bizarre and harrowing journeys. To move their ill-gotten loot, Lothos travelled to the Otherside district where many of his elven kinfolk live in ghettos, segregated from the larger city. His cousin Darius said he "knew a guy," and a meeting could be arranged at the Plaza of Dark Delights that night. The sullen, cloaked Viridian who met Darius & the party was eager to buy most of their loot - his eyes lit up with greed at the sight of the gold trade bars. He wasn't especially interested in the painting, but kicked in a bit of silver for it as part of the whole deal. 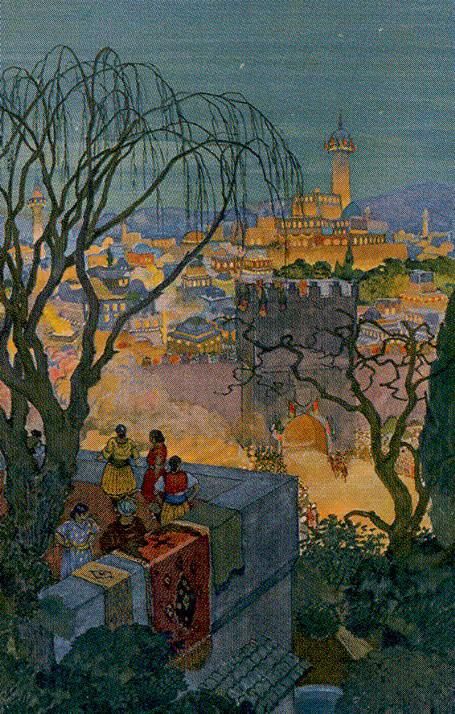 Thousands of silver richer than they had ever been before, the party cast about for something to spend their money on. Someone had heard of a pleasure palace for the rich in the exclusive Cliffside district, called The Sign of Olive & Lotus. Anything could be had there for the right price: fine liquor, exotic foods, high-stakes games of chance, tantalizing companions and strange drugs.

Once again installing "Sir Karavon" in the front of their humble wagon, the group rode up the gates of Cliffside, waving their stolen deeds in the guards' faces. Suitably cowed by the presence of a knight who owned such property, they opened the gates. Following the main Cliffsedge Road, the party espied a beacon in the night. A lone tout, signalling late-night revellers down to his place of business, which turned out to be the very establishment they sought!

The Sign of Olive & Lotus was built right into the side of the cliffs, accessible only by narrow, ancient stair carved into the living rock. The view of Trident Gulf during the day is said to be unparalleled. Checking in cost a princely sum of 200 silvers per person per night, for the cheapest suites and a berth for the horses and wagon! The group was led through sparkling marble hallways by a mute eunuch wearing only a sash of gold lamé. Over carpets made from the skins of striped tigers and snow-white northern wolves, past doorways trimmed in gold leaf with smiling silk-clad houris the party reached their rooms.

With a bit of privacy for the first time in a while, Lothos and Aladar IX ignited the special incenses and herbs they had previously brought and each cast the spell that would summon a spiritual helper to their side: Call to Familiar Spirit.

This done, the gang prepared to party as only those in the Immortal City can... 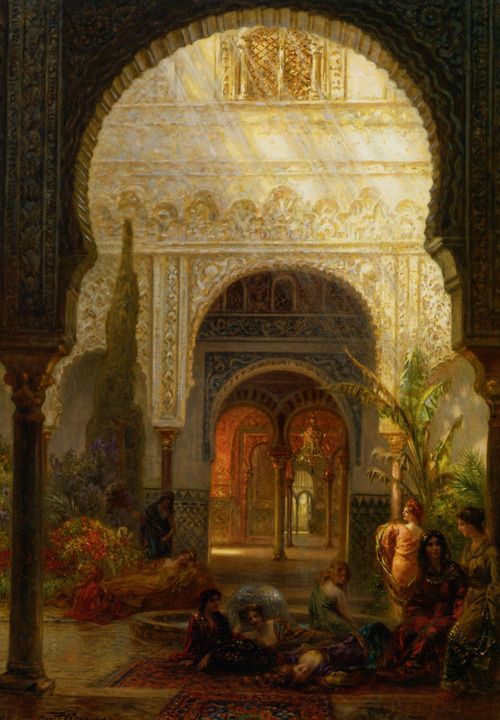