We Are Not The Same

Someone recommended I check out the Eberron campaign setting. I could see myself running it with a few tweaks. I would change the names a bit (way too many "Dragon-somethings"). But the magic-as-technology thing is intensely annoying. I would rather play in a game where wizards ride stagecoaches and helium zeppelins and send telegraphs, than one where every post office is run by a dude casting sending.

'High Magic' in D&D should be a lot less continual light streetlamps and more of this, and I am reprinting it here so I can link to it during internet arguments.

Before the black-armored image there hung seven silver lamps, wrought in the form of horses' skulls, with flames issuing changeably in blue and purple and crimson from their eye-sockets. Wild and lurid was their light, and the face of the demon, peering from under his crested helmet, was filled with malign, equivocal shadows that shifted and changed eternally. And sitting in his serpent-carven chair, Namirrha regarded the statue grimly, with a deep-furrowed frown between his eyes: for he had asked a certain thing of Thasaidon, and the fiend, replying through the statue, had refused him. And rebellion was in the heart of Namirrha, grown mad with pride, and deeming himself the lord of all sorcerers and a ruler by his own right among the princes of devildom. So, after long pondering, he repeated his request in a bold and haughty voice, like one who addresses an equal rather than the all-formidable suzerain to whom he had sworn a fatal fealty.

"I have helped you heretofore in all things," said the image, with stony and sonorous accents that were echoed metallically in the seven silver lamps. "Yea, the undying worms of fire and darkness have come forth like an army at your summons, and the wings of nether genii have risen to occlude the sun when you called them. But, verily, I will not aid you in this vengeance you have planned: for the emperor Zotulla has done me no wrong and has served me well though unwittingly; and the people of Xylac, by reason of their turpitudes, are not the least of my terrestial worshippers. Therefore, Namirrha, it were well for you to live in peace with Zotulla, and well to forget this olden wrong that was done to the beggar-boy Narthos. For the ways of destiny are strange, and the workings of its laws sometimes hidden; and truly, if the hooves of Zotulla's palfrey had not spurned you and trodden you under, your life had been otherwise, and the name and renown of Namirrha had still slept in oblivion as a dream undreamed. Yea, you would tarry still as a beggar in Ummaos, content with a beggar's guerdon, and would never have fared forth to become the pupil of the wise and learned Ouphaloc; and I, Thasaidon, would have lost the lordliest of all necromancers who have accepted my service and my bond. Think well, Namirrha, and ponder these matters: for both of us, it would seem, are indebted to Zotulla in all gratitude for the trampling he gave you..."

"Listen, my lord. I was once a great sorcerer in the south. Men spoke of Thoth-Amon as they spoke of Rammon. King Ctesophon of Stygia gave me great honor, casting down the magicians from the high places to exalt me above them. They hated me, but they feared me, for I controlled beings from outside which came at my call and did my bidding. By Set, mine enemy knew not the hour when he might awake at midnight to feel the taloned fingers of a nameless horror at his throat! I did dark and terrible magic with the Serpent Ring of Set, which I found in a nighted tomb a league beneath the earth, forgotten before the first man crawled out of the slimy sea..."

Stroking the scales with a peculiar circular motion of his fingers, a motion which always carried the fingers back to their starting place, his voice sank still lower as he whispered dark names and grisly incantations forgotten the world over save in the grim hinterlands of dark Stygia, where monstrous shapes move in the dusk of the tombs.

There was a movement in the air about him, such a swirl as is made in water when some creature rises to the surface. A nameless, freezing wind blew on him briefly, as if from an opened Door. Thoth felt a presence at his back, but he did not look about...

-Robert E Howard, The Phoenix on the Sword 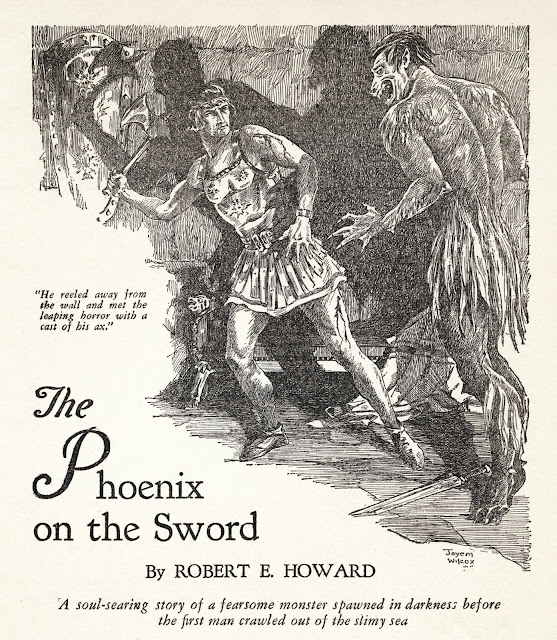