A few months ago, I got the wonderful Helvéczia boxed set from EMDT (read all about it here, and then go buy it here). One day when my online B/X group was a bit short-handed, I decided to run the starting adventure included in the book. My players had a great time. I thought I would have to explain everything to them but they understood the premise instantly and got right into character. Now they ask me when we can play "the fop game" again!

Here is how it all went down: 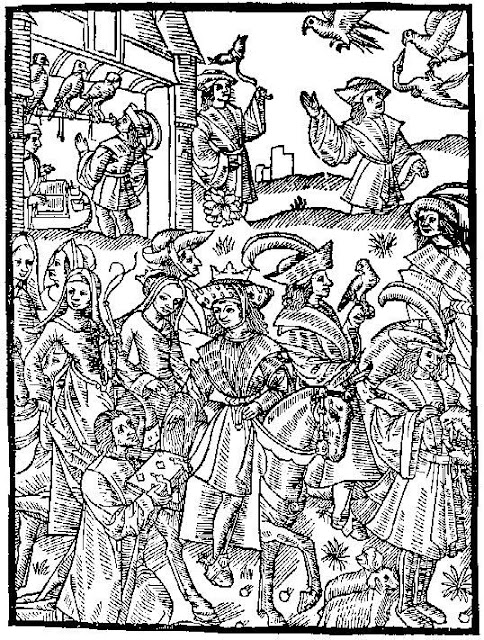 Meeting on the Road

Three wanderers ambled along a cliffside highway after sunset:
Tarasz Lobodou - a handsome Cossack wearing expensive boots and a feathered hat;
Wilhelm Rudd - a sure-footed, sharp-eyed Dutchman with a crossbow, at home in the wilderness;
and
Zenzi - formerly an innkeeper, this German was now pursuing his education in arcane sciences, while carrying a sack full of grenades.

Tarasz, introducing himself: "People outside Zaporizia can't pronounce my name very well."
Zenzi: "Yes, and those inside don't want to!"

Having just been turned out of Oberwalden village by the sullen residents, they were on their way to the next town and the next adventure when they came upon an old moss-covered stone cross by the roadside. A dishevelled vagrant slept beneath it, his hat over his face. Tarasz shook him and he woke with a start of fear, only relaxing when he noticed the group wasn't hostile.

The tramp introduced himself as Bernard, explaining that he had been begging for alms at a house up the road when he was set upon by a gang of toughs who took what little money he had and gave him a thrashing for his troubles - they posted a few guards on the road by a stone arch, so he wouldn't come back.

Moved by the poor man's plight, Tarasz gave him a few coins [+1 Virtue]. The group thought they might investigate these ruffians to see the truth of his story.

But first, Wilhelm's keen eyesight spotted a distant red glow in the nearby forest and the group decided to investigate, with Bernard in tow. Walking along a narrow path through pine forests that had never known a woodsman's axe, they came to a small patch of glowing red mushrooms with fireflies dancing above. Each adventurer took a piece, and the glow persisted after they had been picked.

The forest path continued past the mushrooms until the group came upon a small mountain lake (more of a pond, really) surrounded by rushes. A cave opening in some rock formations was visible beyond. Peering into the water, Zenzi noticed a yellow glow amongst the weeds at the lake's bottom. Wasting no time, Tarasz stripped to the waist, set his sword & pistol carefully aside, held a dagger in his teeth and dove into the water.

Lucky he was to bring a weapon, as the brave Cossack was immediately attacked by a gigantic man-eating frog! The horrid beast almost swallowed him whole, and only swift action with his main-gauche allowed escape. Meanwhile two more of the creatures leapt towards the group on the shoreline, one almost swallowing Bernard whole.

Zenzi, noticing one of his areas of study is Amphibians: "This is the greatest day of my life!"

While Tarasz swam for dear life, a keen-eyed crossbow shot by Wilhelm and a blast from one of Zenzi's grenades taught the other amphibious predators a lesson. Making it to the shore just ahead of his pursuer, Tarazs managed to put a final bullet in it a split-second before it bit him again! After the fight, Tarasz swam down and recovered a glowing golden cross from the bottom of the lake while Wilhelm managed to treat Bernard's wounds [a very lucky Medicine roll!].

In the cave was a tomb, showing an armoured man and an inscription: Von Oberwalden. Part of the carving was movable and had a place for a key or signet of some kind. Zenzi made an impression of the symbol, but lacking any such key the group moved on.

Emerging from the woods, the party espied a moss-covered stone farmhouse across the road. Cheery light shone from its windows and the sounds of song & merry-making could be heard. Further back up the highway, a stone arch was visible against the starlight.

Deciding on a 'divide-and-conquer' strategy, Wilhelm snuck through the woods while the rest of the group walked up the road with a lantern towards the stone arch. Lurking in the trees, Wilhelm could hear the two guards playing dice and grumbling about their posting.

Tough 1: "We have to sit out here, watching out for that bum! Meanwhile Raoul and the lads are drinking in a nice warm cabin. Pfaugh!"
Tough 2, notices the party appraching: "Oh, what's this? Mayhap we've got some relief after all."

But it was not to be. As the party got close enough to recognize, Tarasz whipped out a pistol and the game was up. Caught by surprise, they considered their options but were thoroughly demoralized to see Wilhelm emerge from the trees at their flank, crossbow levelled. The toughs were forced to admit they had robbed Bernard, were interrogated, then bound & gagged and left in a roadside ditch. The beggar was overjoyed to get his handful of coppers back [+1 Virtue for everyone].

Tough 1: "As a good Christian, you wouldn't shoot an unarmed man?"
Tarasz, brandishing pistol: "Mayhap I'll send you to G-d and let him be the judge of that!"

The group learned very little except the gang's leader was a rich gentleman named Raoul, and something important was happening tonight.

As the party returned to the house, the Oberwalden town church bell tolled ten o'clock. The sounds of merriment still issued from inside. Listening carefully, Wilhelm felt sure there were no more than six men inside. The stables held only a fierce-looking, night-black warhorse nobody dared approach. The party decided to lie in wait for a while, reasoning that after all this drinking somebody would have to come outside to relieve themselves.

Half an hour later, their patience was rewarded when a shabbily-dressed thug stumbled out towards the forest. Tarasz and Zenzi crept up on him carefully, the latter preparing to cast a spell on him: The Mirror of Narcissus.

Zenzi's player: "And just as he whips it out, I step forward and meet his eyes..."
Tarasz's player: "I take some small steps back from the scene."

Failing his Temptation save, Witless Heinz (for so he was called) saw Zenzi for a simple rogue just like himself, happily having a few drinks. He spilled the whole story: Raoul was a tough & fearsome leader who sometimes ventured into the woods all alone and showed signs of knowing magic (his boots were shoed in reverse). He had told the gang that an important visitor was arriving tonight, commanding them to return to the house at eleven o'clock. The group sent Heinz back inside with a commandment to keep silent about them [he made a Temptation save to keep his mouth shut, another of the company's lucky rolls this night!].

The group heard Oberwalden's church bells ring out eleven as they deliberated on their next move. Finally they decided on the direct approach: Zenzi threw a grenade through the window while the rest of the group charged in through the stable door! There was the crash of gunpowder, screams of agony & fear, fire and smoke. Tarasz spotted the rogue Raoul standing in the front doorway, lace spilling from his cuffs. The black-clad Spaniard held up a crystal globe which seemed to absorb Tarasz's mind, drawing his whole consciousness towards it - but the Cossack's will was stronger than this black magic and he resisted. Inside, Wilhelm cut down some Frenchman who tried to blast him with a blunderbuss, while Bernard went wild with a club in the confusion & smoke.

Seeing things were turning against him, Raoul tried to flee down the highway, but Tarasz managed to hit him with a flying tackle, knocking the crystal sphere from his hand just as Zenzi came around the corner! Together the two of them subdued the rogue.

As the smoke cleared, Wilhelm saw that poor Witless Heinz had been laid low by Bernard in the latter's zeal to punish the ruffians who robbed him. Taking pity on the fool, he saw to his injuries [another great Medicine roll, and +1 Virtue!].

With the villains subdued, the group searched the house and interrogated Raoul. They found a few Pfennigs on the ruffians, and Zenzi took Raoul's spare set of fancy black clothes, putting them on so he resembled the dashing criminal.

Searching Raoul was illuminating: the party found a catalogue of grave sins (murder, arson, etc), each one signed by himself and another called Goodfriend. The man was tough-minded and resisted interrogation, but the group did manage to get a few details out of him - the mysterious midnight visitor was to be the Devil himself, with whom Raoul would make a bargain most foul!

A plan began to form. The group tied Raoul to a tree outside and cleaned up the house as best they could. Zenzi carefully cut Raoul's moustache off and stuck it to his own lip.

As midnight tolled, the clatter of wheels and neighing of horses could be heard. An elegant black carriage pulled by four fierce chargers pulled up to the small country house. Its driver was obscured by a cloak & broad hat, with clouds of red sparks issuing from beneath as if exhaled by a furnace. Stepping jauntily out of the coach, dressed in an elegant vest & monocle was the sooty-faced Devil, horns and all!

He rapped sharply on the door and Zenzi invited him in. "Ah, nice to see you again Raoul. Do you look a bit different...? No matter." Whether Zenzi's hasty disguise had fooled the demon [another fantastic roll this night!] or all men looked much the same to him was unclear.

"You have the papers?" Zenzi produced Raoul's paperwork and Goodfriend reiterated the terms: worldly fame, wealth, magical power & skill at the Devil's Bible (playing cards) in exchange for a sequence of heinous crimes... and one immortal soul! After signing the contract, Zenzi really didn't feel any different, but Goodfriend said the changes would take effect the next day. He offered to do deals with the rest of the group, but when they weren't interested he bid everyone farewell, jumped into his carriage and was gone with a clatter of hooves.

Return to the Crypt

After this, Raoul gave up some of his secrets under intense pressure from Wilhelm [torturing a captive, uh oh, -1 Virtue!]. The group was able to recover his treasure - a lockbox with some coins and a signet ring showing a snake coiling around a sphere - the same symbol as in the Von Oberwalden tomb.

Returning to the forest cave, the signet ring unlocked a deeper passage inside. Descending the stairs, Tarasz just barely avoided a hidden spear-trap [lucky save!]. At the bottom was a large stone coffin with a carving of a bearded man with a mace & shield, while four moldering coffins lined the walls.

Opening the sarcophagus revealed an ancient armoured corpse with a sword on its chest, holding a scroll-case. When Zenzi's Faithful Servant spell retrieved the scroll, the sword rose into the air and attacked! A tense struggle ensued but with Zenzi's quick thinking, a chunk of coffin-wood and Wilhelm's net, the sword was thrown back into the sarcophagus and the lid slammed shut.

Opening the scroll case revealed an ancient paper: The Testament of the von Oberwaldens. This ancient will seemed to indicate that anyone who held it and the signet ring is the true and rightful master of Castle Oberwalden and the whole valley around it!

With this new windfall, the group wonders what strange escapades might come next?

The Catalogue of Sins: