REVIEW - On Downtime & Demesnes: just what I needed

I bought quite a few LARGE gaming books in the last year or so, but they take some time to read thoroughly. When this landed on my desk, it immediately moved to the top of the list - but it took me a while since I've been so busy actually playing lately! 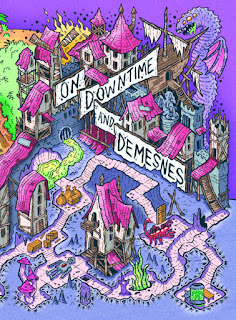 Once in a rare while, an RPG supplement comes out that doesn't need doctoring around with, adaptation or fiddle-fucking - it just works. OD&D (hahaha I see what you did there) is one such product.
Courtney Campbell has proved his worth many times over, both on his blog Hack & Slash and his other products on DTRPG. Even if all he ever released was his classic treasure document (which I use constantly) he would still have made a huge contribution to my own gaming table. Before he gutted it, his blog was a tremendous resource for traps, tricks & DM techniques, along with controversial classics like the legendary "Quantum Ogre."
How many times has your player tried to do something and you thought "Huh... where are the rules for that?" What I often find I need in a gaming book are not more combat rules or magic items but guidelines, tables, sub-systems and procedures. The kind of things I usually have to write myself, ad-hoc when the situation calls for it. I have always had to range far and wide across blogs, published books, pdfs and my own customised rules to cover the situations dealt with in this book. Now Courtney gives us the total package at a single stroke! In a way, the book is like a best-of collection from one man's gaming blog all put together in a nice & usable package. It is accompanied by plenty of Courtney's hand-drawn black & white artwork, which brings a charming '80s 1st-edition feel to the whole thing.
With OD&D we get an extensive list of downtime activities, domain-management rules, options, tables, ideas and hooks. Want to build a castle? Clear a hex? Buy & sell trade goods? Learn a new skill? Find rumours? Whatever it is, Courtney has your back.

Carousing. Healing. Rumours. Bragging. Buying fancy clothes. Gambling. Buying influence! Building your own vehicles! Simple rules for magic item creation and spell research!! Even some good rules for ARENA FIGHTS by Jove, and a few sample arenas to have them in!!! In true B/X house-rule fashion, almost everything is handled with a 2d6 reaction-style roll. Usually on an 9+ something good happens, but this varies between sub-systems.

I used this book in my home game the week I bought it. Vuk Thuul the oracle sacrificed an animal to his mysterious "divine patron" (a demon lord, hahaha). I had no idea what would happen, and then I cracked open OD&D and noticed there are rules for exactly that!

In addition to rules, guidelines and tables, great ready-to-use content is sprinkled throughout. Whenever Courtney gets specific, his imagination blasts off the page. Sections include "Example Mercenaries & Companies" (5 pages of juicy, weird NPCs I would run any day), "Strange Funeral Rites," "Dungeon Doors," "Strange Inheritances" (could easily kick off your next campaign), "Random Items for Sale at a Bazaar," "Strange Pet Stores" (OK, not sure when I'll use that) and several quirky, memorable sample villages.
I also like the lists of "100 obnoxious peasants" and "100 noble patrons," written by Chris Tamm of the legendary Elfmaids & Octopi blog. This section was cited in Melan's review and he didn't seem to like it much. They definitely bear the familiar feel of Tamm's work, but I don't mind that at all and will for sure use them. Just reading them sent me into fits of chuckling as I imagined the bizarre, dangerous and funny antics these NPCs might bring to my game. Would I use these tables every single time? No, but that ain't no crime.
Campbell draws from a wide range of wisdom here in developing these rules. Actually, I think he doesn't cite his sources enough. Would it be too much to ask for a mention of the 1st edition DMG(!!!), or maybe Jeff's Gameblog for the carousing rules[1]? Maybe a lot of this stuff is covered in ACKS, which he does list in the bibliography? (I haven't read it). Also, this book does duplicate some material you probably already have, especially in the AD&D dungeon master's guide - in fact, it could probably be thought of as a B/X DMG. I don't mind too much. Having almost every fucking thing I could want to run the "Greater D&D" in one book is more than worth it.

One other complaint I'd level at OD&D is that it covers such a tremendously wide range of material, sometimes it doesn't do so with the depth I'd like. The Influence rules could have been delved into more deeply, or maybe explained better. And the "carousing mishaps" table has 10 entries of familiar stuff - compare them to Ben's vivid table here. Ultimately this is a minor complaint, this book was clearly written so it can be used in anybody's game, and a DM who wants to expand these tables to suit his own setting obviously can.

I bought this in pdf and after paging through it once, I immediately ordered a hard copy. It's going right in between Realms of Crawling Chaos and Labyrinth Lord on my old-school gaming shelf, it is that good. If you want to run a sandbox game (and if you don't... what's the deal?) you will definitely make use of this. If you play just about any old-school game or retroclone, there is now one less reason to bring your 1st edition DMG along to game night anymore, just to reference the rules on sages for the twentieth time. Just as well, since mine is crumbling before my very eyes!

[1] - Jeff's "Party like it's 999" post is not the first time carousing is mentioned (Dragon magazine covered this in the old days), but it is the benchmark for the rules that OSRmen play with today.

Courtney's new book Artifices, Deceptions & Dilemmas is out now I think, so watch for a review of that one too. In the meantime, get fucking hyped with this:
Posted by HDA at 10:27 AM